There is really no escaping any longer the fact that Yo La Tengo are now true elder statesmen of the modern music scene. With the apparent demise of Sonic Youth few other representatives of their generation remain; meanwhile the band draws perilously close to its thirtieth anniversary. Most would agree that their longevity comes from Yo La Tengo’s ability to reinvent themselves through experimentation and adoption of new styles including film soundtrack work and their legendary portfolio of covers.

After all this, YLT’s 13th full length album offers up, well, a rather nice collection of love songs and it’s hard not to feel just a bit disappointed. There’s no doubting the artifice behind what the band have produced; the songs are well crafted and perform their job effectively but seem happy to sit back and allow the music to wash over with little attempt to surprise. On first listen the album lacks immediate impact (although it benefits from repeated listening).

There are of course exceptions. ‘Well You Better’ benefits from the addition of organ and wa-wa guitar halfway through to transform the mood of the song into something funkier while atmospheric electronics in I’ll Be Around add depth. The two slightly longer tracks that bookend the album are the standouts. Ohm layers rhythmic patterns to create a driving energy that perfectly balances the slower moving vocal line while the guitar distortion that perpetually threatens to drown all this out adding a slice of danger to offset the danger of kitsch.  ‘Before We Run’ brings together all the instruments used throughout the album into a quasi-orchestral summation that ends the album on an uplifting note.

Not that it’s really needed as this collection consistently lacks a darker edge to balance the beauty that is found here in bucket-loads. In fact the sound of the album is rather too homogenous especially in its second half which has a tendency to blur into a haze of acoustic guitar and crooning vocals. This album doesn’t lapse into self-parody by any means but it does evidence a narrowing of YLT’s sonic palette, the breadth of which has long been their greatest asset.

On the other hand it is quite clear that this approach was entirely conscious. The title itself suggests a willingness to produce a record which can fade into the background rather than demanding our ceaseless attention. Many of the tracks playfully open with a melancholic intro which is brusquely pushed aside as the main body of the song arrives, most effectively in Stupid Things where the transition for a moment suggests the layering of two simultaneous tempos.

It is also worth noting that the complaints I have registered could almost as easily have been applied to 2003’s Summer Sun and that it is a penchant of the band to produce a restful album showcasing another side of their character, just like their idols the Velvet Underground did in 1969, before embarking on another wave of experimentation. I don’t think this beautiful album is a sign of Yo La Tengo going into decline but evidence that after all those years it’s nice to be able to take your foot off the accelerator occasionally and take the scenic route. 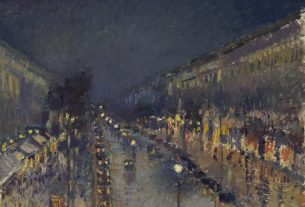 ‘A Love Story’ by Émile Zola

‘And Breathe…’ is a welcome breath of fresh air