It’s that time of the year again: the beautiful people are suiting up, Daniel Day-Lewis is making space on the mantelpiece, and gongs are being dished out left, right and centre. The big one – the Oscars – doesn’t roll round until 24th February, but of the rest it’s the Golden Globes that carries the most weight, and its 70th incarnation took place last week.

The film section of the ceremony was contended by a largely predictable core of movies: Ben Affleck’s hostage thriller Argo, historical drama Lincoln, Quentin Tarantino’s latest blood-splattered offering Django Unchained, rom-com Silver Linings Playbook, and musical adaptation Les Misérables. Of these it was Les Mis and Argo that came off the best; the former scooped three awards – the most of the night – and the latter took best film and best director for Ben Affleck. Affleck, who had been up against some of Hollywood’s biggest names, accepted the award ecstatically: “when they put your name next to the nominees… it’s an extraordinary thing in your life”. He also claimed: “I don’t care what the award is”, which is good because he’s almost certainly going to lose to Stephen Spielberg at the Oscars.

Spielberg’s own film Lincoln secured a win for Daniel Day-Lewis as Best Actor in a Motion Picture (Drama), with Day-Lewis looking decidedly less awestruck than the night’s other winners as he stepped up to receive the gong. If he goes on to win the equivalent award at the Oscars in a month’s time, it’ll be his third and he’ll set a new record for most decorated actor. Other than that though, Lincoln was probably the biggest underperformer of the night; of seven nominations – the most of any movie there – this was the only one.

Triumphs in the television categories were similarly concentrated. US political miniseries Game Change took three awards, as did Homeland, whose stars Damian Lewis and Claire Danes both took away gongs. HBO comedy series Girls received two, and the rest went to a plethora of well-known shows.

The awards, though, are of course only half of the fun; the evening’s guest appearances and unscripted moments were, as ever, the most memorable. Sadly Ricky Gervais didn’t return this year to reprise his role as gleeful star-bullying circus master, but the list of presenters was more star-studded than the list of nominees themsleves, with Jessica Alba, Christian Bale, George Clooney, Will Ferrell and Julia Roberts among numerous other A-listers who adorned the stage. Arnold Schwarzenegger and Sylvester Stallone had a little back-and-forth, and Lincoln was introduced by no less than former President of the United States Bill Clinton (even if hosts Tina Fey and Amy Poehler preferred to announce him as “Hilary’s husband”). The most memorable and talked-about event of the evening, though, was Jodie Foster’s coming-out speech, a Hollywood swan song of sorts that simultaneously closed the ceremony and set Twitter alight with banal commentary. So that was the Golden Globes, and it provided more than enough glitz, glory, and shots of famous people hanging out together to keep us going until the Oscars. 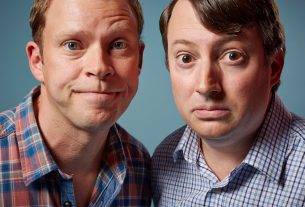 The Peep Show Guide to Life in Lockdown