It is perhaps an understatement to say that OUWAFC seconds, the Furies, were a little uneasy when they travelled to Wolverhampton last week to take on the team who dealt them a crushing 21-1 defeat last term. The challenge must have seemed especially daunting to the three St John’s players making their university debut.

After conceding two goals in the first five minutes, it seemed initially that the Furies were in for another thrashing from top-of-the-league Wolves. However, it soon became clear that the seconds had acquired both experience and an improved playing structure since their last meeting and were not going down without a fight. Determined tackles and confident clearances from the back four kept further goals at bay for half an hour, enabling Wen Hoe, Julia Skisaker and Chloe Coates to drive the ball forward, testing the Wolverhampton defenders and on several occasions threatening to score. As a result, Wolverhampton were left looking slightly ill at ease, a scenario which would have seemed unfeasible when the two teams met in Michaelmas term.

Unfortunately, the Furies were contending with what seemed like gale-force winds which swept the pitch, making long-range shots and passes problematic. The first half ended 4-0 after some impressive footwork from the Wolves’ centre-forwards enabled them to score two more goals, despite the efforts of first-year biologist Sophie Smith, who gave a spectacular performance in goal for the Furies.

Clearly unnerved by the their opponents’ noticeable improvement, Wolverhampton increased their tempo in the second half, scoring further goals thanks to impressive set pieces and demonstrating the undeniable class that earned them their spot at the top of the table.

They were clearly feeling the pressure, however, because when a throw-in from Sam Moore to captain Katherine Coyte deflected off a Wolverhampton defender, it sailed over the opposition’s keeper and into the net, giving the Furies a much-needed boost.  Not long afterwards, however, a decisive tackle just inside the Oxford box resulted in a Wolverhampton penalty which Smith narrowly failed to keep out.

Despite the match resulting in a 10-1 win to Wolverhampton, it was obvious to both sides that the Furies have stepped up their game since their last meeting, as shown by the fact that they conceded half the number of goals this time round, thus denying their opponents the hefty goal difference they need to fulfil their ambitions of promotion. 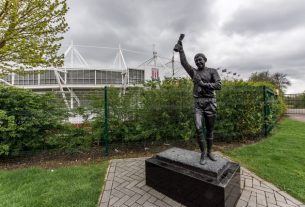