St Hugh’s have announced the establishment of an annual fortnight-long summer school at the College for eight 14-16 year old Burmese children, starting this
September.

Named after Hugh’s alumna and Nobel Peace Prize winner Aung San Suu Kyi, the school will focus on English language training, with extra-curricular activities to give the pupils a sample of life in Oxford.

The College Principal will also host a barbecue during the school, and a number of St Hugh’s students and alumni have volunteered to help out at the event.

The announcement of this summer school continues the strengthening of ties between the University and Burma over the last year. Suu Kyi returned to Oxford and St Hugh’s in June 2012, after almost two decades under house arrest in Rangoon, and raised the prospect of a student visit to Burma.

This then inspired OUSU and the Oxford Hub to make plans, ratified by OUSU Council last month, for a delegation of around eight students or recent graduates to go on a week-long visit to Burma.

The news has been well-received by the Oxford Burma Alliance, whose co-Presidents, Ebba Lekvall and Nora Godkin, said: “We are absolutely delighted that the summer school is being launched by St Hugh’s College, as it is something we know Daw Aung San Suu Kyi really wanted to see happen.”

They continued: “We believe that this project will bring an opportunity for young Burmese people to gain not only English language skills, but also much needed knowledge about the world.”

Andy Wilson, a third-year physicist at Hugh’s who met Daw Suu Kyi last year and has also volunteered to help out at the summer school, commented: “Although we’re starting off small with only about eight students in our first year, there are some great plans in the pipeline.

“St Hugh’s was set up to educate women too poor to be able to attend the existing women’s colleges of the university, so I think it’s very fitting that even today, we are working as a college to improve access to further education for a severely underprivileged group.”

Usain Bolt should pay his taxes or jog on 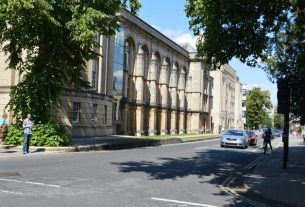