At talk of Bionics, the Bionicles that filled our childhood, or more spectacularly the Paralympics, come to mind. Little do we know of the constructions occurring in the confines of laboratories today. From bionic organs to limbs to bodies, the psychologist Herbert Meyer reveals to us the most audacious projects of our present time. 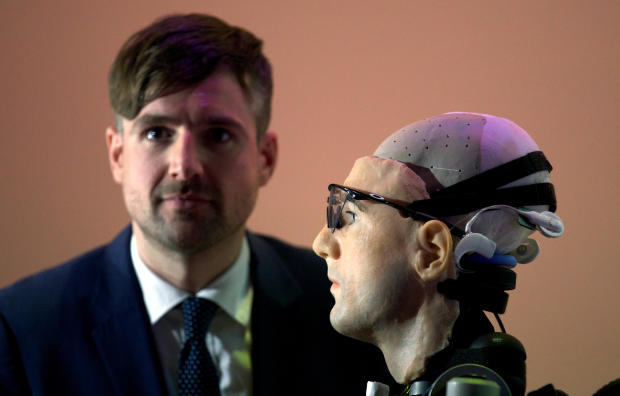 A typical Channel 4 documentary, this good looking protagonist gives us a tour of these projects against a backdrop of dramatic classical music, connecting us to the emotional side of what may seem merely chunks of metal as he himself has had a prosthetic arm his entire life. He reveals some fascinating experiments, such as a brain chip that could greaten our memory capacity. We see a bionic eye transplant, one that mimics the path of development embarked upon during our first years of life. But the central masterpiece of the documentary is somewhat bizarre. You may find it disturbing, fascinating, or no more than an imitation of Star Wars. It’s a bionic man, a man constructed entirely out of prosthetic components, unveiled at the London Science Museum this week. His internal organs and principle blood channels are all on show. His face is a lifeless replica of Meyer’s. All the supposed muscles and joints interact with one another; he can walk, he can talk. He has dignity- he wears a suit, a silk scarf and a safari hat, and he gets appropriately embarrassed. Meyer does not refrain from calling his robotic replica ‘awkward’ throughout the whole show, which is hardly surprising.

The show has its comic value, but also touches upon massive questions we face today about the limits of human life and the value we place on it. Amongst the patchwork of projects, we see an overweight North American man undergo a bionic heart transplantation. A word of caution towards those who hate gore, this scene is completely uncensored. His operation costs him $120,000 and enormous efforts on behalf of the scientists fabricating this heart. Effectively, he has bought the right to life in its most overstretched form. Over a century ago, Oscar Wilde explored the monstrosities of exchanging the soul for lifetime wants in The Picture of Dorian Gray, leaving behind a message that remains pertinent today. This modern day man has exchanged his heart, an organ often associated with soul, for a gadget and the want of a longer life. Meyer is left pensive. Is the economic value of a human life limitless? And is this channelling of resources and wealth not indirectly costing many other lives? But these questions are left mid-air. The documentary is provocative but not discursive.

Fantasy, one of living beyond what nature has assigned us, is indeed what permeates the show. To one rock-climber, who has had two prosthetic legs since a near-death experience in his youth, ‘normal bodies are boring’; he is amazed by the extra power and agility of his metallic legs. Herbert Meyer engages with this fantasy, he himself wants a better hand, that extra ‘bit of freedom.’ But his reaction is that of increasing uneasiness and perturbation. Upon viewing his bionic replica, he immediately observes how he lacks everything that makes us human. As a documentary maker, it seems he is actually trying to harness this fantastical technology, communicating it to us humans before it takes on a complete life of its own.

A streetcar named Desire – A preview