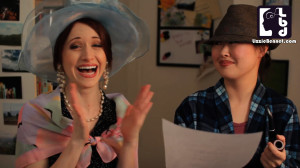 Pride and Prejudice is a 19th century classic. It conjures images of young ladies in unflatteringly high-waisted full-length dresses, drawn out conversations through long dances, and the handsome face of a certain Mr Darcy. Committed fans can debate for hours over the superiority of either the BBC or the Keira Knightley adaptation but in either case the location is set resolutely in the English countryside in the 1800s. Present day America seems worlds away from those green and pleasant lands, but that is exactly where Lizzie and her sisters have been translocated to in a new adaptation of the classic work.

Set up as a series of video blogs, the Lizzie Bennet Diaries promises to immerse P&P fans “in ways never experienced before”. In addition to the original videos on the YouTube channel (youtube.com/LizzieBennet) you can follow Lizzie’s tumblr, read Twitter conversations between Gigi and Fitz and even stalk Jane’s fashion blog, ‘Looks By Jane’ (also on tumblr). It’s not quite ‘choose your own adventure’ but it’s certainly ‘choose the extent of your adventure’. It can become something of an addiction when you find yourself viewing twitpics of Lizzie and Darcy in San Francisco instead of writing an essay on Romance literature (it’s still studying, right?).

But for all its novelty, the extra social interaction is merely the icing; the videos themselves are the quadruple-layered chocolate cake. The scripts and actors are unbelievably funny. Whoever thought of using ‘costume theatre’ to present characters who can’t be on screen was a genius. Personal highlights include the videos where Lizzie portrays her pushy Southern mother and the venture capitalist Catherine de Bourgh (who has a sickly pet dog called Annie Kins).

The original story has clearly been somewhat updated to fit its new context. No one really elopes any more and who writes letters in an emergency? Charlotte’s marriage to Mr Collins in the book is little more than a business transaction, and that is exactly what it’s been updated to in the LBD. The show is currently reaching the end of the Pemberley arc and from the looks of Lizzie’s Twitter feed it appears that her phone has ominously broken.

Details like these make this adaptation seem as though it has a life of its own. Lizzie’s story is happening in real time (new videos every Monday and Thursday) just as any other celebrity you may follow online. Watching the events unfold and speculating on how the story will be updated is an absolute delight – I’ve never retrospectively appreciated a novel to such a great extent.

The series was co-created by Bernie Su and Hank Green, with a creative dream team experienced in ‘new media’. Hank and his brother, John Green, seem to be the benevolent godfathers of YouTube, filming and creating channels from Vlogbrothers and Crash Course to Sci Show and The Brain Scoop – all worth checking out if your essay deadline is imminent. Hank Green commented on the LBD saying: “It’s very unusual; there are no proven successes in this format, so it’s really a risk.”

But it’s undoubtedly a risk that has paid off: with over 18 million total  views, the Lizzie Bennet Diaries has clearly captured the imaginations of its loyal subscribers.

Ashley Clements, the brilliantly sardonic Lizzie, pokes fun at herself as well as everyone else. She and the rest of the talented cast invigorate a show that could potentially have been static and monotonous.

It is well worth investing procrastination time into this show, and if you’re (un)lucky enough to be writing an essay on Austen then this show certainly counts towards ‘further research’ – just make sure you don’t describe Pride and Prejudice as “adorbs”.