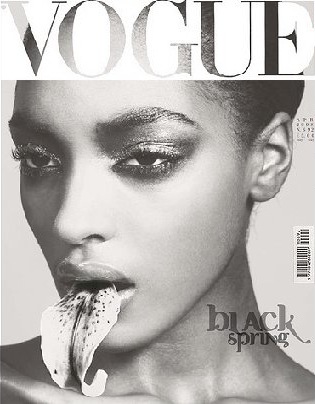 Another month, another Vogue cover. As is to be expected, another beautiful female face (on this issue Rooney Mara) stares up from its cover, advertised as ‘Pale Fire’. So far, so Vogue. Inside, more and more models, blondes and brunettes, don the whims of this season’s darling designers. Again, none of this seems out of place. But it should be, because out of 1, 416 covers since US Vogue’s creation in 1892, just 14 have featured a non white model. That is less than 0.1%. It’s not simply a culture of exclusion, either. The 2012 catwalk for the Spring/Summer catwalk Dolce and Gabbana featured what appeared to be a Blackamoor statue on an earring. John Galliano’s famously anti-semitic outburst in a Parisian bar in 2011 during which he told a group of Italian women that in the second world war, ‘your mothers, your forefathers would all be fucking gassed’ and the subsequent defence of his actions as ‘farce’ and ‘theatre’ by stylist Patricia Field are shocking. They testify to an industry where racial stereotyping or abuse is all too often swept under the carpet or even celebrated.

By its nature, fashion should be inherently forward thinking. Governed as it is by the transient creations of designers, for the most part, it is. What other industry has given us the expanded women’s shoulder silhouettes to the size of American footballers (see the 80’s), celebrated the functionally useless (puffball skirts) or even damaged (ripped denim), or weird conceptual amalgams such as the snood and the jegging? More than the fancy of the privileged few who decide what we wear, style has also played an important social role in the way people live their lives. Mary Quant’s miniskirts of the 60’s were crucial in the development of teen culture; the voice of youth in breaking away from the austerity and moderation of their parents. Madonna’s, David Bowie’s, and now Lady Gaga’s outfit choices challenge accepted definitions of male and female sexuality. So why does it seem to lag so copiously behind almost all other forms of cultural expression in its depiction and deployment of racial identity? Why, in plain terms, is fashion racist?

Carole White, of Premier Modelling, described how difficult it was to gain equal pay for Naomi Campbell even as a supermodel, and of the dearth of Indian, Pakistani, or Bangladeshi models. She placed part of the blame on big fashion houses in Milan and Paris, who are apparently more reluctant to feature black models. Yet British model Jourdan Dunn has spoken of the difficulty of finding work, even as a successful black model, and how any success comes about from working twice as hard.  Superstars such as Beyonce or prominently featured actresses in ad campaigns, such as Thandie Newton often have their skin lightened through airbrushing and chemical relaxants rubbed into their hair. There are two strands of thought here which need to be questioned. The first, most obvious one, is the idea that it is a uniform idea of beauty, one that is size zero, and white that that shifts copies. Even whilst denying that racism existed in fashion, Alexandra Shulman, editor of British Vogue, commented ; ‘In a society where the mass of the consumers are white and where, on the whole, mainstream ideas sell, it’s unlikely there will be a huge rise in the number of leading black models. If you look at the characters that sell magazines such as Grazia and Heat, it is Jennifer Aniston, Cheryl Cole and Catherine Middleton.’

The second, related concept is that any move outside this culture is somehow ‘exotic’. D&G’s earrings hark back to a bygone colonial era. They are symbols of division and oppression, of elitist white attitudes recurring in so-called whimsical humour. Even ‘ethnic’ inspired shoots frequently feature white girls, partly due to an industry wide ignorance about what lighting, hair and make up suits darker skin. Yet the expansion in the last decade of Vogue into China, Thailand, India, Mexico and Latin America shows that the magazine itself acknowledges a change of the ethnic make-up of the super-wealthy. So why haven’t their ideas about beauty changed too? Moreover, the magazines Shulman mentions in the UK are not the high-end glossies of the super wealthy, but publications aimed at the general public.  Shulman’s comments little acknowledge the changing demographic of the UK and the USA. To reflect these changes, over a third of mid-price covers in America this year should have featured Asian, Black and Hispanic models, and fifteen percent of British covers.

In an industry where models are the bottom of the food chain, it is all too easy for producers and designers to treat them not as humans, but as images which can be cut, pasted, and photoshopped. But it isn’t just about models, but designers, make-up artists, photographers. The whole infrastructure of fashion has to change, to reflect an exciting, diverse, and globalised world, people who understand the real needs, and appearance, of their public.  There are signs that this is happening, albeit slowly. The exposure of John Galliano led to his dismissal from Dior, and for Dior model and actress Natalie Portman to state‘I hope at the very least, these terrible comments remind us to reflect and act upon combating these still-existing prejudices that are the opposite of all that is beautiful.’[Designers such as Oswald Boateng have cut a swathe in the fashion industry, but awareness will only come about, in terms of hiring, acknowledging, and representing the world as it is in the fashion industry, when we vote with our Manolo Blahniks.