George Galloway walked out of a debate on Wednesday evening after learning that the student he was debating with was an Israeli.

The Respect MP had just begun to debate Eylon Aslan-Levy, a third-year PPEist at Brasenose, on the motion ‘Israel should withdraw immediately from the West Bank’.

But as Aslan-Levy was beginning his speech, and said, “We wanted peace, we got war,” Galloway could be heard asking if his opponent was an Israeli.

After Aslan-Levy confirmed that he was, Galloway grabbed his coat and began to leave the room, refusing to continue the debate and saying: “I don’t debate with Israelis. I’ve been misled.”

Students at the talk could be heard gasping and accusing Galloway of racism, but he repeated: “I don’t recognise Israel and I don’t debate with Israelis.”

Aslan-Levy, who grew up in London and has joint British-Israeli citizenship, said: “I am appalled that an MP would storm out of a debate with me for no reason other than my heritage.

“To refuse to talk to someone just because of their nationality is pure racism, and totally unacceptable for a member of parliament.”

But the MP for Bradford West was defiant later that evening, writing on Twitter: “No recognisation of Israel. No normalisation. Christ Church never informed us the debate would be with an Israeli. Simple.”

Mahmood Naji, who runs Oxford Debates and selected Galloway to speak, said: “I was initially relieved to see Mr Galloway arrive after we had waited around one hour and 20 minutes after the agreed time of arrival.

“The debate then seemed to be running smoothly with Mr Galloway brandishing his usual rhetorical flourishes, and Eylon responding in equally effective manner.

“However as soon as Mr Galloway started inexplicably putting his coat on I was stunned.

“What’s more, Mr Galloway claimed to have been ‘misled’ as he walked out, which was utterly baffling. At no point during my email exchange with his secretary (and I have all the emails to prove it) was Eylon’s nationality ever brought up or mentioned, nor do I expect to have to tell the speaker what his opponent’s nationality is!”

Naji added: “I am deeply disappointed at Mr Galloway’s behaviour. I am baffled by his claim that he had been misled, and I am extremely sorry to all the people who waited so long for the debate only to see it cut short.”

Galloway has been consistently outspoken in his views on the Israel-Palestine conflict, and in 2009 received a Palestinian passport from Hamas leader Ismail Haniyeh. Hamas are considered a terrorist organisation by the US and the EU.

This was the second time this academic year that Galloway has visited Oxford. In October the former ‘Celebrity Big Brother’ contestant spoke at the Oxford Union, where he was met with protests by members of Oxford Feminist Network. These came after Galloway described allegations of rape facing Wikileaks leader Julian Assange as constituting “bad sexual etiquette”, but added “not everybody needs to be asked prior to each insertion”. These comments led to the NUS passing a motion adopting a ‘no platform’ policy towards the MP. 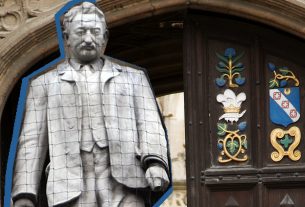