Oxford University Greyhounds succumbed to a 27-9 loss against Chinnor II in a bad-tempered County Cup final. Playing in their first County final since 1979, the Greyhounds were undone by a Chinnor side who were ultimately superior across the field: heavier in the scrum and more incisive at the back. Regrettably the game may be remembered more for the referee’s performance than the players. As tempers flared in the first half, the official dealt three yellow cards, and a succession of penalties to both teams choked the game’s rhythm and prevented it ever  really taking flight.

The match started brightly enough, with Chinnor receiving the Greyhounds’ kick-off and making a swift march downfield, helped along by a penalty awarded for a Greyhounds forward entering a ruck at the side. The Chinnor backs then strung together several passes in quick succession and found extra men on the right wing. Captain Trevor Powell dived over the line with just two minutes on the clock to draw first blood. The Chinnor pack were heavier by a good deal and they looked unstoppable at the breakdown, all but bullying the Greyhounds off the ball.

With five minutes on the clock, though, Oxford pulled themselves onto the scoreboard as Phil Bell put a penalty between the sticks from just outside the Chinnor twenty-two. At the early stages Chinnor’s supremacy was such that it looked as though the Greyhounds were in for a pummelling.

The referee, unfortunately, had other ideas. As the game progressed, the breakdown of the scrum became an increasing flare point between the teams, as fouls were committed frequently by both sides. The referee had undoubtedly to intervene in some way but he took so long reprimanding players after each successive foul that the game had little chance to flow. Both teams had opportunities to kick for the sticks, Phil Bell adding another three to the Greyhounds’ tally before he and his opposite number Sam Angell took turns to miss an attempt. On the ground the game was getting more and more scrappy and it was little surprise when, with twenty-five minutes on the clock, Chinnor flanker Max Williams was shown a yellow card for going off his feet in the ruck.

At the half hour it was Oxford’s turn to taste the referee’s ire, as number seven Will Fell joined Williams in the sin bin. The brutality of the forwards’ game made its mark on the Greyhounds in other ways, as Matt Craggs had to be replaced by Sam Hitchings after sustaining an injury. With five minutes left of the half came the return of Max Williams to the fray for Chinnor, although this sadly coincided with team-mate Sam Blewitt being yellow-carded for a foul in the ruck. On the stroke of half-time, Oxford fly-half Dylan Jones had the chance to put the hosts ahead with a penalty attempt, but the ball bounced wide of the uprights to leave the score at 7-6 going into the break.

At the start of the second half, Chinnor seemed to have their back line firing again with Tristan Corpe running over the line on the far left wing with a try that was almost an exact copy of Powell’s in the first half.

Chinnor pumped the ball quickly out of a ruck on the right-hand side all the way to the left wing to give Corpe an easy finish. With the conversion duly scored, the visitors now led 14-6.

On 55 minutes, the guests edged further ahead with a try from veteran prop Simon Matthews. The Chinnor forwards took the ball into a maul from a lineout on the Greyhound 5-metre line and powered relentlessly over for the hefty front row to bundle the ball home. The sizeable Chinnor support greeted Matthews rapturously as he was substituted two minutes later, replaced by Andy Berry.

The game was slipping away from the Greyhounds, and when Phil Bell opted to kick a penalty for the sticks instead of going for the corner with a quarter of an hour left one wondered why the home side didn’t go for as many points as they could get, given the thirteen-point deficit between the sides. Ten minutes from the end came the Greyhounds’ best chance of the match as scrumhalf Sam Egerton very nearly released Sam Hutchings for a try.

The replacement forward accepted Egerton’s pass and marched irresistibly towards the try line, with three Chinnor players trying to hold him back. Hutchings dived over the line but the ball was held up for a five-metre scrum. As the game died Chinnor ended the stronger, with another try four minutes before the end. Winger Harry Hillier put the finishing move on a succession of short blasts at the Greyhounds’ try line.

Player after player attacked the Greyhound defence on the line but until Hillier accepted the ball the hosts held fast. The final sweetener for the Greyhounds came as the whistle blew for full-time with a last penalty converted simply by Sam Angell.

The win was no less than the defending champions deserved but the game certainly will not go down as an example of the prettier side of rugby. This was a game won by the forwards and in the end Chinnor’s were bigger, heavier and harder. 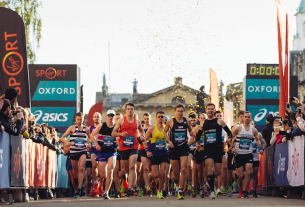 A Wet Weekend for Oxford Half: Our Coverage of the Race

A walk in the park? England’s Euro qualification.