A Die Hard flick in everything but name (and lead actor), Hollywood’s latest all-American action romp Olympus Has Fallen shares none of the charm of Willis’ signature series, with the dull Gerard Butler proving himself unfit to lace the great man’s shoes. The film can more-or-less be summed by with a single set-piece: Butler’s character Mike Banning beating a North Korean terrorist to death with a bust of Abraham Lincoln. It’s balls-out, brash, Americano action and not much else, with meagre attempts at subtlety (the shot of a bullet-ridden Old Glory flapping in the breeze is a clear attempt to inject some poignancy into this otherwise mindless movie) drowned out by bullets, knives and lots of big shouty men. 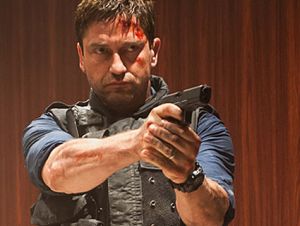 The tension that came to characterise the Die Hard series is lost entirely in this imitation, and the unbalanced mess that is the final product only demonstrates further how finely poised John McTiernan’s film was, where riveting action perfectly teamed with Willis’ magnetic charisma and the serpentine excellence of Rickman. In comparison, Butler and co. are a group of schoolchildren playing with pea-shooters in the park. Eckhart, who garnered acclaim for his portrayal as Harvey Dent in Christopher Nolan’s epic The Dark Knight, plays the President who lost his wife in an accident for which Banning was (partially) to blame. Subsequently, Banning loses his status as head of the President’s detail and exists in a limbo state until he takes it upon himself to save the USA following the President’s capture at the hands of the North Koreans. A lot of running and gunning (and a bit of messing about with nuke codes) follows, with yet another unsuitable role assigned to Morgan Freeman, playing the House Speaker (and, subsequently, acting President) with the quiet dignity that has come to define his career of late, but is tragically out of place in a film such as this.

Whilst the brains (or lack thereof) behind Olympus Has Fallen could clearly not have predicted that their film would debut in cinemas alongside the Boston Marathon bombings and the fist-waving of the real-life North Koreans, they should surely have predicted that terrorism wasn’t dead and buried, and that North Korea would inevitably shake their fists at some point in the future, and the entire production seems idiotic and insulting as a result. It is hard to envisage any American (any politically aware human, even) actively enjoying the emotional manipulation that Olympus Has Fallen offers with its stark images of the collapsing Washington Monument and an exploding (complete with gorier-than-gory details) suicide bomber. This is an immensely lazy way to make films, playing on the emotional vulnerability of the audience and supplementing it with even lazier one-liners (“He just opened the gates of Hell” was particularly groan-worthy) resulting in an end-product that reeks of ostentation.

This is not a film for Butler to be proud of. The musical score is dismal, but not much could be expected considering the drab excuse for a film that it had to frame. Why Oscar-winner Melissa Leo accepted the role of weepy, screaming, ‘terrified woman’ beggars belief, and the insufferable self-importance of the production team who seem almost proud of their ‘terrorism porn’ makes for a deeply unsettling production. Even Butler’s carefully constructed ‘cheer moment’ feels out of place, and almost veers into the uncomfortably racist. Not much more can be said for a film that attempted to appeal to the masochism of the modern audience, but instead proved itself little more than a shoddy Die Hard knockoff.

Faxon and Rash lead the Way