Bad weather and a string of postponed matches in Hilary term meant that the X-Changing Women’s Football Cuppers Final this year took place, unusually, in 2nd week of Trinity. It had been over six weeks since St Catz beat off competition from Teddy Hall and the ladies collectively known as the Foxes from Nuffield, St Anthony’s, Wolfson, and St Cross colleges won their semi-final in a 3-1 victory over Keble.  Foxes and St Catz no doubt met at Wolfson College pitches on Sunday with a considerable amount of trepidation about how they would perform after such a lengthy vacation from the game. If so, then it certainly did not show. The match was lively and exciting from the first minute, with standards of play exceptionally high from both sides.

St Catz proved strong and organised in attack, charging up the field and giving striker Steph Wesson the chance to shoot into the top left hand corner and score the game’s opening goal in spectacular style. Knowing that Foxes would surely come back at them, St Catz continued piling on the pressure going forward whilst at the other end the back four seemed almost impenetrable thanks to Blues players Hannah Griffiths and Amy Trenter. As captain, Trenter lead by example, putting in some devastating tackles and thwarting any attempt to equalise from the Foxes. Midway through the half a St Catz corner was only partially cleared by the Foxes’ defence meaning that Amaryliss Barton could coolly slot a second goal into the bottom left hand corner.

Despite being 2-0 down the Foxes did not lose heart, and continued to look dangerous on the offence, with co-captain Kate Leader showing off her skill and creating several chances in the box. This must have worried St Catz somewhat, especially after Griffiths received an elbow to the face and had to sit out the remainder of the half.

Not long into the second half St Catz took their lead up to 3-0 thanks to the incredible ball control of Becky Wyatt, who appeared to dribble straight though the Foxes’ back four only to sidestep their goalkeeper, Pauline Ravillard, and casually score the game’s third goal.

With less than ten minutes to go a Foxes corner found the feet of Laura Smith whose resulting shot took the score up to 3-1. But any hope of a comeback was swiftly quashed by a counterattack from St Catz which ended with a second goal from Wyatt.

As if that wasn’t dramatic enough, in the dying moments of the match Foxes managed to play the ball over the heads of the Catz defence, leaving Lindsey Hoh with a clear run at the keeper, which she rounded off with a well-executed goal. Unfortunately, it was not enough to snatch victory from St Catz, who became worthy winners of Cuppers after having reached the final for the previous two years in a row without success. 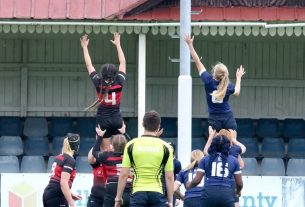