Ancient traditions are a part of everyday life at Oxford. We avoid the grass, strutting in our subfusc while painfully aware that we look as ridiculous as we do dashing. Traditions make us stand out, so they are equally exhilarating and embarrassing. It was with this in mind that I followed the red dragon flags on my way to the first Eisteddfod to be hosted in Oxford since 1944.

The Eisteddfod is an 8 day Welsh cultural festival held twice a year, and was established in 1176. It is compiled of competitions of dance, music, performance, and most importantly, literature. The festival’s climax is the ceremonial awarding of a throne-like chair and a crown to the best poets of strict meter and free verse respectively.

And yes, there are druids. Both the chair and the crown are presented by the Arch-druid, who is joined on stage by a whole host of other druids. The modern day Eisteddfod retains all these elements with plenty of balloons and cider thrown in for good measure, and attracts around 150,000 visitors every year.

Having grown up with the Eisteddfod, I can testify that for a child it is the highlight of the yearly calendar, the competitions are the products of months of preparation, and their outcomes frequently cause a frenzy of furious and deliciously self-righteous objections.

The Eisteddfod is not confined to Wales. There is in fact an Eisteddfod held annually in Argentina, and so Oxford’s Welsh Society, Cymdeithas Dafydd ap Gwilym, bravely decided that this tradition should also be brought back to Oxford. And so an audience formed of students, prospective students, professors and past professors congregated in a sophisticated building opposite Jesus College. There were welcoming drinks and nibbles, followed by a skilfully bilingual general introduction, and then the competitions.

The audience heard poetry readings, a medley on the clarinet of the most famous Welsh folk songs, sketches, bilingual public speeches, and comedy acts. After the interval, it was time for the highlight of the evening, the ceremonial awarding of the (in this case miniature) chair. The most important aspects of the ritual were maintained, including the proclamation of peace featuring the use of Cymdeithas Dafydd ap Gwilym’s ceremonial sword.

Despite their various mediums, there was one thing all the acts and ceremonies had in common, one theme that ran through the whole evening: pride. It wasn’t a spiteful pride, it wasn’t about rubbing it in anyone’s faces or about being different. There was a pride that we had all come together to share our traditions, not only between ourselves but also with those students who had come just from curiosity.

At the Oxford Eisteddfod, the winning poet was not donned with the traditional purple robe, but with a scholar’s gown, blending together perfectly the traditions of Oxford and of the Eisteddfod. Being home to so many traditions, Oxford is again home to another. The Oxford Eisteddfod was remarkable not only for the bravery and ingenuity of its rebirth, but also for a tradition that we, both Welsh people and Oxford students, can be unapologetically proud of. 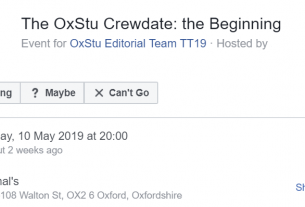 A Touch of Male