Varsity Matches between Oxford and Cambridge are often steeped in history, with decades of closely fought out contests leaving one side just a couple of wins ahead of the other. The American Football Varsity is just two years old, but walking along the touchline at the Oxford Rugby Club on Saturday afternoon, it was clear that the passion and commitment involved was no less than one would expect to find at the 159th Boat Race or 131st Rugby Varsity Match. It was the Cambridge Pythons who emerged as 20-13 victors over the Oxford Lancers, to take a 1-0 lead in the series, after the first contest in 2012 ended as a 14-all draw. Highlights are below:

As the Oxford Rugby Club donned helmets and shoulder pads and went all stars and stripes for the day, the match was played out in typically British conditions; heavy winds and episodic hailstorms meant that this game was a far cry from the glitz and glamour of the NFL. Indeed, the opening exchanges were cagey, with both sides sizing each other up with solid defence breached only by sporadic darts without anything meaningful and the first quarter went scoreless.

It was the Pythons who broke the deadlock, with Ed Davenport slicing through the Oxford defence from 10 yards to touch-down to put his side 6-0 ahead. At this point the Tabs looked in control and some simple mistakes from the Lancers’ offence led to frustrations flaring up on the touchline. Jonathan Brooks-Bartlett was particularly animated both as a spectator and as a player and it was his dynamic running that dragged the home side back into the match.

Jack Culpin made the initial break, shrugging of Cambridge tacklers to take his side past half-way, before an excellently crafted Lancers move put Brooks-Bartlett away on the left but his dash for glory came up agonizingly short of the line.

But the man who is nicknamed “the Priest” got his house in order to bundle over from just yards out at the next down. Gareth Pease slotted through the extras to give Oxford a one point advantage at half-time.

Brooks-Bartlett, sporting a special red helmet apparently to let the opposition know not to go too hard on him, and captain Guy Edwards were thorns in the Pythons’ defence throughout. Led by their two playmakers, Oxford started the second-half strongly and some effective blocking and shoddy tackling allowed Brooks-Bartlett to streak down the left to score a 60-yarder, with the Tabs’ defence grasping at thin air.

At 13-6 up, the Lancers were beginning to look assured, but as the game was beginning to lull, a floated 15 yard pass found Jack Tavener in the in-goal area to touch down and a 2-point conversion from Joseph Yarwood put the visitors into the lead.

From that point on the Pythons took control of the match, with the Lancers limited to mini-breaks but were too often let down by simple errors. Mid-way through the final quarter Yarwood drove over from a couple of yards to stretch Cambridge’s lead an effectively put the game to bed.

Lancers President Elliott Neale was philosophical about his side’s 20-13 defeat to Cambridge and was quick to praise the work ethic of both sides:

“It was a very close game, both teams tried very hard and we’re gutted to have lost. Our execution and tiny details that really make a difference let us down today but it was a brilliant performance all round from both teams.”

In a diverse team containing nine different nationalities from Slovakia to India, the tiny details were never likely to come easy within a squad where experience of competitive football is limited in itself.

‘We’ve got guys who played for a couple of years before they came here and are four-year veterans and we’ve got guys who’ve never even seen a game of American Football before the first training session, but we’re always happy to coach-up players regardless of how much knowledge they have of the game,” says Neale.

The Lancers are still finding their feet and were out-jousted on this occasion, but the desire and motivation for improvement is plain to see.

It’s sport on TV: send in the clowns 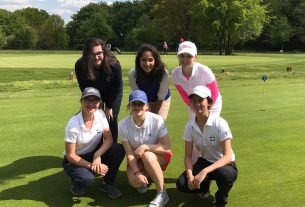 Why the world should boycott the upcoming World Cups