Fuse Twilight and Gossip Girl, plonk them down amongst the clock towers in Oxford, and you get Oxford Blood. The novel revolve

s around Harriet French, a fresher reading History at the fictional Lilith College. Facing mild unease as it is, settling in amongst the numerous sets of cutlery at Hall having come from a “working class northern state school”, Harriet soon finds out that she has much scarier problems on her hands than which fork to use first: vampires. Not just normal vampires either; they are wealthy, aristocratic, and incredibly handsome vampires with their own elite dining society, The Cavaliers. This is not just your average white-tie dining society either. They dine on pan-fried breast of duckling accompanied by the finest vintages but of course, being vampires, they also drink the blood of their dates. Inevitably, Harriet is soon smitten with one member – the terribly dashing, albeit suspiciously pale and oddly cold, Tom. Unfortunately for Harriet, her familial connections to the highest ranks of The Cavaliers make it a challenge for her to be with the boy of her dreams. The novel follows Harriet as she struggles with tutorial essays on British History, dreadful hangovers and a society of powerful vampires intent on keeping her away from the man she loves.

What is immediately noticeable is the author’s love for Oxford, which naturally makes her novel captivating to anyone studying here; Derwent’s descriptions of Oxford life are charming in their familiarity. She mentions the mysterious omniscience of the porters, conveys the crippling sense of inferiority one feels when overshadowed in tutorials, and the delight in finding the right bop outfit. It is also, however, a stereotypically romanticised version of Oxford. Aristocrats’ offspring abound, bringing along with them incredible opulence and a reminder of our own mediocrity. This may not be the most accurate portrayal of a university with so many other dimensions, something the author is sure to clarify in a personal note, but it is nevertheless congruent with the fantasy world Derwent soon dives into. In fact, she even manages to make Oxford seem a tad more believable through her fantasy world – ever wondered how to get a first and a blue? Be a vampire, and make sure it’s a nocturnal sport.

While Derwent has done a fair job in recreating Oxford realistically, this does not extend to the alternate world of vampires. The novel is at numerous points unbelievable, and the author seems to exploit the inherent flexibility allowed by fantasy to rescue herself from difficulties presented in the plot. That the best and brightest amongst the Oxford student population could so regularly disappear from the university with feeble excuses, and have been doing so since the English Civil war without anyone noticing, is somewhat incredulous. In a world of the author’s imagination, anything is possible – but it still requires believability, and it still needs to function according to an internal logic, which the book does not always do.

Another element hampering believability is the characterization, or in many cases the lack thereof. Most of the characters are one-dimensional and dull, and the author seems to lack enough interest to make them anything more. There is no development that builds up to the characters’ mistaken convictions of love and sudden break-ups. As a result many of these scenes just seem like random splatterings interspersed through the novel which are hard for the reader to care about. Moreover, the star of the book is not the protagonist herself, who does not come across as a particularly engaging individual, but Harriet’s mother. Her mother’s flashbacks are refreshing, and lend the book the much-needed emotional depth that it is otherwise lacking. Unfortunately these are few and far between, and ultimately this strong-willed, imposing woman gives in to her daughter, who with the exception of her determination to be with Tom, is otherwise weak-willed herself – and she even starts to waver on that one towards the end of the novel.

This is hardly the next great English novel, nor is it aiming to be. What it is, however, is humorous light reading that pokes a bit of fun at Oxford students. If you want to read something intellectually stimulating though, your reading list for the next tutorial is probably a better bet.

Screaming Spires, the next book in the series is currently on sale, with Ivory Terrors due for release by the end of the year.

Student solidarity and the Quebecois example 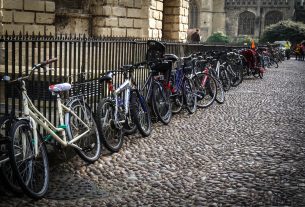