Jesus students are among the most satisfied with their college experience, followed closely by students at Merton, New and St John’s, while graduates at colleges including St Cross, Linacre and St Antony’s are the least, according to a major survey of 8,243 students.

The survey took place in November 2012, and asked about students’ overall experience, including satisfaction with learning and teaching, as well as accommodation and support services. Approximately 47 per cent of students responded.

On questions including quality of learning experience, support services, library facilities and whether students would recommend the university to potential applicants, Jesus’s student body was the happiest.

“This doesn’t surprise me as, despite not being a highly over subscribed college, Jesus appears, from my experience, to have more of a community than other colleges”, said James Walker, a second year at Jesus.

Prithu Banerjee, a third year Engineer agreed, commenting: “Jesus is pretty awesome. It’s small and tight knit and it helps foster a great atmosphere within the college. The best thing is that we get to know the other years really well.”

Walker noted the College’s “higher than average food, bar and accommodation prices”, but said this was made up for by “a range of extremely generous grants, awards and scholarships.”

St Hugh’s College ranked the lowest of all non-PPH colleges which accept undergraduates, with St Hilda’s, Pembroke and Mansfield also near the bottom of the table for this criteria.

“For all its sins, I’m proud to be a Hughsie,” said Matt Handley, a second year at the college.

He added: “Being located in the arsehole of nowhere means we’re compelled to get along with each other or risk being isolated from society entirely, forcing a genuine community spirit. Our history of unconventionality and laid-back atmosphere makes us welcoming to applicants who haven’t fallen off the Oxbridge public-school conveyor belt.”

Jesus also topped the table for learning experience, with 90 per cent of its students satisfied, followed closely by Trinity and Worcester. LMH and Wadham were the least pleased however, with 84 and 85 per cent satisfied respectively.

Despite a massive an average of 86 per cent of students behind satisfied with their college library facilities, only 42 per cent of St Cross graduates are satisfied.

A St Cross spokesperson responded: “St Cross does need a better library: we are intending to provide one as part of a new building to be ready by our 50th anniversary in 2015.”

St John’s, Keble and Merton students were the happiest about their living experience, with Teddy Hall, St Hilda’s and St Peter’s having the most gripes about their accommodation. Only 36% of Teddy Hall students were satisfied with the cost of their rooms, compared to 85.6 per cent at St John’s.

Satisfaction with living costs, which includes food, drink, transport and social costs, varied between 85 per cent at St John’s, compared to just 51 per cent at Teddy Hall. Magdalen and Pembroke came near the bottom of the table, and this may perhaps be linked to this year’s introduction of compulsory prepaid charges for some years.

Promisingly, all colleges which accept undergraduates showed an 85 per cent or higher satisfaction rate for college welfare support.

However, feedback on financial support from college showed greater discrepancy. Four colleges, including Wadham, Queen’s, Magdalen and Trinity had 80 per cent or more of students who were satisfied, compared to 16 colleges with 70 per cent or less student satisfaction, including just 56 per cent satisfaction at Mansfield.

In light of recent debate about postgraduate funding, there was unsurprisingly a large difference between satisfaction with financial provisions between postgrads and undergrads. Whilst 77 per cent of undergrads were happy with the financial support from college, just 49 per cent of taught postgraduates students said the same.

Nevertheless, students were pleased with the efforts of their college finance and bursary staff, with all but one non-grad-only college having 85 per cent or more students satisfaction.

There was also a big discrepancy regarding college sports facilities. St John’s again topped the table at 97 per cent satisfaction, more than double that of the lowest ranked, St Peter’s, with 42 per cent.

Overall, Oxford students are happy with the social activities in college, with all but four colleges accepting undergrads showing 85 per cent or more student satisfaction. Felix Hamer, a first year at Keble, agreed, saying: “Keblites certainly approach the whole ‘uni experience’ with the right attitude.”

He continued: “There are insane numbers of societies and sports teams and the bar is so cheap it’s difficult not to spend time in there with your friends.”

Overall, 92 per cent of Oxford students said that they were either satisfied or very satisfied with their whole student experience.

A University spokesperson said: “This overall satisfaction score has gradually increased in the years 2010-2012, and the University consistently does much better than the national average.

“The results of the Student Barometer survey are made openly available so that anyone can see them, with the aim of stimulating further improvements in the student experience at Oxford.”

The Malcontent On: The Apprentice 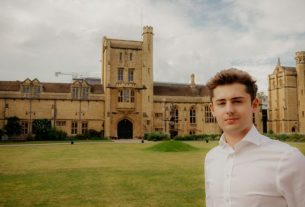 Battle of the Brands: Sainsbury’s and Tesco’s continue their war for Oxford’s shoppers