Protesters gathered outside the Saïd Business School last Saturday to decry the visit of Paul Kagame, President of Rwanda.

Over 40 people, some of whom had travelled from London specifically for the demonstration, were present and threw eggs in front of the business school in protest.

Kagame, who has been accused of human rights abuses, was in Oxford to collect the Distinction of Honour for African Growth award from the student-run Oxford Africa Business Conference.

The protesters came armed with banners, drums and Rastafarian hats, and were mostly of Congolese origin. They blame the Kagame’s administration for inflaming the continuing conflict in the eastern DRC.

One Congolese protestor dismissed Kagame’s claims that Hutus in the Congo could pose a security threat, the reason which Kagame gives to support intervention in the DRC, saying: “Come on, how many Hutus are there? Kagame has been lying since 1994.”

She said she was “ashamed” that the tax she pays to the British government is going directly to Kagame’s administration, who have killed “so many” in the Congo.

Her fellow protesters held signs and banners which read “Kagame is a génocidaire” and called upon the British authorities to arrest Kagame and send him to the ICC.

Demonstrators were held back from the Saïd Business School entrance by more than a dozen police officers, as they enforced a fifteen metre barrier around the perimeter.

Avoiding protestors, Kagame and his entourage entered the school by a back entrance, before speaking on the catalysts behind sub-Saharan African economic growth. Kagame then answered questions from the Dean, and audience members.

The conference programme announced that it was honouring Kagame “for his leadership in developing a thriving and stable economy” and for championing “education and enterprise opportunities for the people of Rwanda”.

When asked about the suspension of direct aid to the Rwandan government from the UK in his interview before conference-goers, Kagame claimed that he was being blamed for conflict in the Democratic Republic of Congo unfairly, suggesting that instability would exist there regardless of his role.

An individual who works in Rwanda later supported Kagame’s position, calling Congo a ‘basket-case’ which sends British aid down the drain.

UN evidence suggests that Kagame’s government had been funding the M23 rebels in the Eastern DRC, who are partially responsible for the ongiong conflict in the area

However Kagame claimed during his interview at the conference that those who criticise his leadership are “mainly from outside [Rwanda]” and that their claims did not square with the “happiness” of his people.

The Saïd Business School has previously defended its decision to allow Mr Kagame’s visit to go ahead despite the planned protest, stating: “We prize open discussion and in line with the University’s Freedom of Speech policy the students have invited President Kagame to speak and there will be the opportunity for those present to challenge him as appropriate.

“We are aware that President Kagame is a controversial figure and his presence here implies no endorsement of his views or actions. We have taken the view that it’s appropriate to ask him to address any issues that are put to him from a platform in Oxford.” 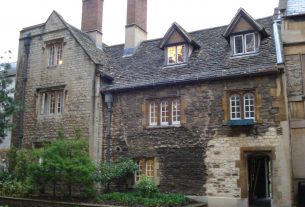 Rainbow flag torn down at the beginning of LGBT History Month

“You come to expect inappropriate touching”