Oxford: Where you drink with your tutors, read with your partner and sleep with your books, right? Wrong. Forget dreamy spires, dusty libraries and billowing gowns for a second; this is a story that will send a shiver down the spine of anyone who’s ever referred to ‘the Oxford bubble’.

On Tuesday 14th May, seven men were convicted at the Old Bailey of rape, arranging child prostitution and supplying class-A drugs. All of these men lived in Oxford. Kamar Jamil, 27, was a security guard at Tesco. Two others, Mohammed and Bassam Karrar, were brought up in Cowley. Much of the abuse took place in rented rooms at the Nanford Guesthouse on Iffley Road. All of this almost next door to Oxford students’ accommodation, going on as they were cosying up with their books for night.

The victims – some as young as 11 – were abused between 2004 and 2011. They were drugged, raped, beaten and burnt with cigarettes. One was even forced to have an illegal abortion at the age of 12. Most of them were preyed upon because they lived in children’s homes; they were young and vulnerable, at an age when even the most protected girls struggle to come to terms with ideas about love and sexuality. One victim, testifying in court, likened her relationship to the men who groomed her as one of domestic abuse; she believed that they loved her and would care for her, no matter the horror they inflicted upon her body.

There are many strands to this story; the case looks remarkably like one from Rochdale (Greater Manchester) last year, the shared ethnicity of the men convicted has been under consideration and the implications for the treatment of women and the persecution of rape in this country is damning. Every stage of the victims’ evidence demonstrates gross mishandling by authority figures, from cases dropped because the witness was too scared to give evidence, to children’s home staff who knew young girls were being abused but felt powerless to stop it. A comment from one worker stated that a 13-year-old victim was “sexualised” and “dangerous” to men. How do we have a hope of dealing with abuse if professionals still believe that girls are capable of bringing it upon themselves?

Needless to say, it is shocking to hear the kind of archaic views expressed by people involved in this case. There is much criticism in the national press of local authorities, who treated the girls as if they were delinquents; many of them were seen out drinking late at night or played truant from school, as if that justifies the fact that they were taken advantage of by adult men. In police interviews, Anjum Dogar, 31, who was convicted of 3 counts of rape as well of other offences, said “The way I see it is troubled kids making up allegations. I can get people to talk about their characters here. They are well known, some of these girls.” For a long time it seems that this defence was sufficient.

For many, these crimes are so horrific that everybody might prefer to bury their heads in the sand than deal with underlying issues. The ‘cultural’ factor in this case, and others like it, is perhaps not the men’s Muslim background. It’s the very British problem of ignoring uncomfortable problems. These girls were abandoned by society; people turned their backs on them, maybe because they would return home dirty, with matted hair, at the very time when they needed support, attention and care. The most heart-breaking aspect is that they succumbed to grooming and did not admit their abuse to police because these men were often the first people to feign affection for them.

There is therefore more to Oxford than the ‘bubble’ we create for ourselves, with our formal dinners and gowned ceremonies. There are people suffering down the road from us here as anywhere else in the country. The girls who testified in court deserve, at the very least, to be rewarded by us not turning a blind eye to this kind of activity anymore; the authorities may have been the ones who made the obvious mistakes but it’s society as a whole who have let the victims down.

We need to change our attitude towards people we might not consider ‘our problem’ and do everything we can to make it clear that abusers will be caught and punished. The convictions on Tuesday were a good step but we – everybody – can still do much more to stop sexual violence in this country. 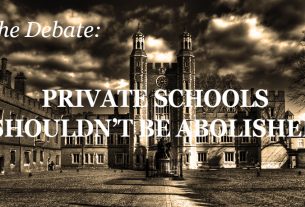