Christopher Marlowe’s most famous play, Doctor Faustus, sees the eponymous antihero sell his soul in a quest for power and knowledge. By the end of this performance I was almost willing to sell my soul for it not to have rained. Unfortunately for Christ Church’s unpolished production, the atmospheric setting of the grandeur of the Christ Church cathedral gardens gave way for the definitively less atmospheric setting of the Blue Boar lecture theatre. Anyone who has ever wondered if Christ Church has an ‘ugly part’, rest assured, it does.

Much like the weather, this production did not shine to its full potential; it’s never a good sign when the most impressive part of the show is that they managed to learn their lines (admittedly there are many lines, some of which are in Latin, but the point remains). Though there were solid efforts from the three leading characters — Jack Wightman’s Wagner was a particular highlight — the direction was poor. At times the blocking was almost painfully bad – for instance the fact that Helen of Troy (Emily Sapsed) had her back to the audience for the majority of her time on the stage. The “face that launched a thousand ships” was unrelentingly obscured from the audience.

It would be dangerous to condemn this production completely; there were redeeming features — for example, the much-appreciated presence of a live string quartet who added a sophisticated touch. Many of the faults may well have been caused by the weather and an emergency relocation, but it’s Britain, and rain is always likely. I hold out every hope that the sun emerges tomorrow and the rest of the run is not marred with such ill-luck as the opening night, but if it does not, then this production will seriously need to reassess the way it uses the space in which it has found itself placed.

One small highlight of the play was the comic heights it achieved – the often maligned comedy scenes which appear in the play were well done, if handled a little crudely, and served to entertain. The parts in which the cast appeared to truly get their respective characters emerged almost entirely in these scenes, and the melodrama which felt so overblown in moments such as Faustus’ attempts at repentance (which were insincere and unimaginative) was safely positioned in scenes crowned by lewd gestures and witty repartee.

Faustus is an excellent play, and this production amuses in the way such a fantastic script cannot fail to, but the balance between the tragic and comic elements was ill-struck. While Faustus’ “waxen wings” may have “mount[ed] above his reach”, this production kept its feet firmly planted on the ground. 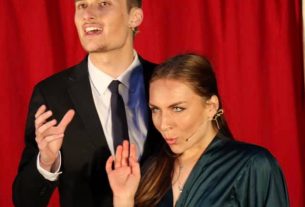