Toby Mather’s act is a performance that occupies a territory somewhere between theatre and comedy; it is a thoroughly enjoyable piece of highly original comedy that both amuses and intrigues.

Mather assumes the persona of a melancholic middle class male, swigging from a bottle of claret, lamenting the woes of his private school upbringing, of those middle-aged dinner parties and his ultimately unsuccessful love life, all aspects of his woeful life that he has recorded in his intimate collection of poetry. It is an act that the comedian manages to maintain in spite of the audience’s evident enjoyment.

His performance is as thoughtful as it is thought-provoking. His unique and cynical approach to comedy parodies parody and satirises satire. Indeed it is this stylistic exploration that culminates in the enjoyable climax of Mather’s set: his creative output is not restricted to poetry, but he has written plays too, plays which he forces two members of the audience to perform.

There is a linguistic subtlety that inherently occupies Mather’s polished performance, an intricacy that allows jokes to linger and also to recur like leitmotifs throughout the course of the half an hour. However, Mather carefully creates opportunities for, perhaps, more conventional comedy to be introduced, whether through his embarrassment at current Facebook activity or in his relentless satire of such observational comedy; he is careful to strike a balance between delicate and evident comedy.

It is a refreshing performance that is unique and daring, but in all the right ways. It is enjoyable because of its ingenuity and fantastic comedy as a result of its delivery. 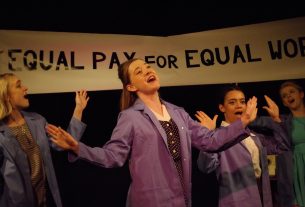 Review: Made in Dagenham at the Oxford Playhouse