The man who made the greatest single donation to the University in its 900 year history has been found dead at the age of 79. Renowned computer science expert Dr James Martin’s body was discovered on Monday in the sea off his private island in Bermuda.

Dr Martin’s 2005 donation of $100 million was integral to the development of the Oxford 21st Century School. The school has since been renamed as the Oxford Martin School, and has praised Martin’s legacy as “a passionate advocate of the power of ideas”.

The Bermuda Police Service released a statement, declaring that, “Dr Martin’s lifeless body was found floating in the waters of the Great Sound near Agar’s Island [at about 17:30 on Monday 24 June] by a kayaker.”

The service added that there were not any initial suggestions of suspicious circumstances, but that “An investigation into the circumstances surrounding Dr Martin’s death is ongoing”.

Professor Ian Golding, director of the Oxford Martin School, paid tribute to Dr Martin: “Jim provided not only the founding vision, but was intimately involved with the School and our many programmes.

“We have lost a towering intellect, guiding visionary and a wonderful close friend.”

Martin continued to contribute to the school’s development, matching a $50 million fundraising effort in 2010. The school describes itself as” a unique, interdisciplinary research community of over 300 scholars working to address the most pressing global challenges and opportunities of the 21st century.”

In a 2011 interview with The Independent Martin described his inspiration to found an initiative such as the school in the wake of the September 11 terror attacks:

“I was getting more and more concerned about the problems of the planet.

Dr Martin’s foretelling of the invention of the Internet in his 1978 book The Wired Society earned him a Pulitzer Prize nomination. He also published a record-breaking 104 textbooks over the course of his career

The University Vice-Chancellor Andrew Hamilton stated that “James Martin was a true visionary, whose exceptional generosity established the Oxford Martin School, allowing researchers from across the disciplines to work together on the most pressing challenges and opportunities facing humanity. His impact will be felt for generations to come”

Martin was a graduate of Keble College, matriculating in 1952 to study Physics. He purchased Agar’s Island in 1997. 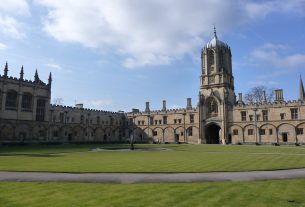