A crime drama set in a town called ‘Paradise’ on a remote lake in New Zealand is setting itself up for the portrayal of an idyllic landscape hiding the ugliness of the lives of those who live there. If this was what we were looking for from Top of the Lake, then it fulfils both aspects. The stationary wide shots of the landscape are breathtaking for both the natural beauty they contain and the thought that has gone into them, the photography team clearly choosing compositions and times of day to get the most powerful imagery. Such shots have been carefully interspersed throughout the opening episode. Where sets have been obviously built – such as the women’s help camp – the shipping containers are thoughtfully arranged to form something of a brightly coloured steel Stonehenge, a golden field with the lake and mountains forming a backdrop. The imagery created is a seamless fusion of natural and man-made beauty.

Meanwhile, in the closer shots, we are shown a host of intriguing characters. Det. Robin Griffin (Elisabeth Moss), visiting town to be with her ill mother, has been called in to deal with pregnant 12-year-old Tui Mitcham, who has attempted to drown herself in the lake. Robin is clearly the observer of the show. Whilst she grew up in the town, she has been away for some time and holds the external attitudes and morals of us as the audience. Moss plays the role well, portraying the thoughtful and caring Robin whilst always holding an air of uncertainty that keeps us on edge and adds to our suspicions of her darker past – presumably the reason she left the town in the first place and why she chose to specialise in dealing with sexual assault.

In contrast we are shown the introvert and xenophobic Mitcham family, lead by patriarchal figure Matt (Peter Mullan), chilling in his calm, yet angry pragmatism. Aggressive and self-righteous, we see Mitcham and his tattoo-bearing sons confront the women’s help group, who are no less interesting and add an uncomfortable humour to show. Lead by the artistically distant GJ (Holly Hunter), the other women have formed something of a cult in her honour: “She’s in a different mental state” we are told by one of her followers, before hearing about this woman’s failed love affair with a chimpanzee.

The combination of studios – BBC, Sundance (USA) and UKTV (Australia/NZ) – would suggest that there were a lot of good minds collaborating on the show. That has been seen to an extent in the first episode with good acting and shooting, and a script that has been left open for a great deal to happen. Yet for all the interesting characters and scenery, the opening episode was at times slow and often underwhelming. That said, there was enough in it to suggest there is a great deal more to come from the series, and hopefully now with the scene setting done, the drama will increase in intensity – only time will tell.

The first episode of Top of the Lake is available on BBC iPlayer and episode two will be on at 21.10 Saturday 20th July, BBC2

Review: Surviving Tsunami at the Pitt 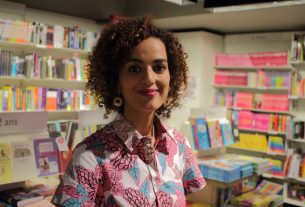 Leïla Slimani: The Writer Missing from Your Bookshelf

Brit Marling’s star is rising in The East