If The Colour of Dawn gives away little as a title, the first sentence is quick to remedy that. We are plunged right into the narrator’s dawn prayer against the Devil who besets not just Haiti but the inside of her very home. Yanick Lahens begins this novel bleakly and immediately. The present tense is potent; our protagonist’s distraction at her brother’s absence sees her bypassing conventional introductions and taking us straight to the jaded heart of matters.

This young man, Fignolé, is the crux of the novel despite appearing only through the eyes of his sisters, Angélique and Joyeuse, until the flicker of an epilogue. Anxiety over his failure to come home the previous night preoccupies the sisters from cover to cover: the Méracin family may be made up of polar personalities, but their mutual love is fiery. Adversity taints their past, present, and future; and their story is worded beautifully in Alison Layland’s recently-published translation of Lahens’ original French. I flew through the 149 pages in one sitting – rarely is such quality of writing paired with such readability.

The young women reminisce constantly – flashbacks for the story’s sake (the action takes place across a single day), but also perhaps something of a self-assurance that at least they had a past, in case a future is put on hold. It is an unsettling read. The chapters waver between pessimism and optimism as the two sisters air their thoughts in turn. Angélique’s religious submissiveness is a far cry from Joyeuse’s joie de vivre, though below the surface each seems as shaky in her conviction as the other. Joyeuse insists on distancing herself from the radio forecasts yet, one night, her little brother’s lit eyes terrify her as she tells us “life kills pure hearts first of all”. She dances the night and fear away, but her vitality cannot hide the grounded cynicism that grips both sisters.

Admitting that she deceives herself with the here-and-now, Joyeuse avows: “We are out to lead life on, to grab from it more than it wants to give”, and indeed their world hands them nothing. It is subversive and knotty: rights, wrongs, ups, downs are all meshed together. The novelist’s darting between perspectives adds much to the storytelling. A scene struck out midway through when a scorned man sprays mud over Joyeuse and her scantily-clad friend as he accelerates away, and an ‘I-told-you-so’ old lady further frustrates them into elbowing their way onto a tap-tap. The poignancy comes as Joyeuse catches sight of this figure left on the scorching pavement for another half hour. Satisfaction? Discomfort? Pity? Her conscience is mute.

I wondered whether the titular ‘dawn’ signified a new era for the family – prospects despite the odds. Alas Angélique’s remark that “February has touched our daybreaks with cold hands” at the opening may have told more than I had read into it. I came out of the book in a sort of daze: I was sat under blue skies just like those on the pages (Britain having its rare tropical moment), but mine were the benign skies of which Angélique had bitterly speculated. I could not possibly grasp the Méracins’ world but the writing had almost convinced me otherwise: fiction at its most compelling. Angélique talks of words and images being force-fed to others who then chase them from their hearts on realising their intolerability. Lahens’ work, disquieting as it is, couldn’t be driven away even with the boldest efforts. 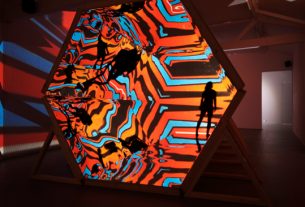 Review: KALEIDOSCOPE at the Saatchi Gallery offers less than meets the eye