Police were called to an address in Crowberry Road in the Blackbird Leys area of Oxford at 5.07 am on Saturday.

The victim was rushed to John Radcliffe Hospital by paramedics, who were called by Thames Valley Police shortly after. She was released on Sunday morning.

The 21 year old man believed to be responsible was taken into custody, before being bailed until 29th September. Two other men aged 31 and 28 have been arrested on suspicion of affray, and have been bailed until 28th August.

A further two men aged 26 and 40 were also arrested on the same charges, but have now been released without further action.

The woman, who is in her 40s, suffered from “serious but not life-threatening” injuries, according to a spokesman from South Central Ambulance service.

Detective Inspector John Turner, who is leading the police investigation into the shooting, said: “I would like to reassure the local community that incidents such as these are extremely rare.

“Police officers and PCSOs will be undertaking extra patrols in the area to provide a reassurance to the community of Blackbird Leys.

“I would urge anyone with any information about the incident to contact the police immediately.”

Seven people were also arrested in Blackbird Leys on Sunday night on suspicion of Grievous Bodily Harm, after a man was hospitalised. It is not yet clear whether the two incidents are linked.

Police crime statistics for the area within one mile of Blackbird Leys from June 2012 to May 2013 show the area averaging 24 incidents of violent and sexual offences per month and 190 total incidents per month. There has been no significant change in the crime rate in the area over the last year, although crime rates in the Oxford area as whole have decreased.

Anyone with further information about the incidents should contact Thames Valley Police on 101, or can speak anonymously to Crimestoppers on 0800 555 111 or online at www.crimestoppers-uk.org. 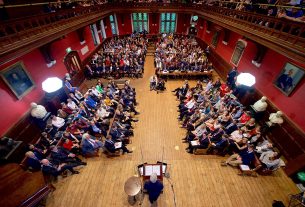 The EDL’s march into obscurity