Christopher Marlowe’s Edward II is a play that ends where it begins, with the death of one king and the succession of another – but what happens in between is a powerful portrayal of court politics gone wrong and the disorder of deposing a king. Joseph Hill-Gibbins directs an eccentric production whose visual boldness and energetic performances are not quite enough to disguise the lack of daring in interpreting the text.

This production revels in the bizarre and unnerving, and although the medley of images and sounds do not always translate into meaningful statements about the play, it was refreshing to see something so unashamedly experimental. Hill-Gibbins is not afraid to shock and disturb the audience. Flashing lights, pounding drums and hulking soldiers in oversized helmets often created an atmosphere of anarchy.

Building on this lurking sense of danger is Lizzie Clachan’s meta-theatrical stage design. Backstage is fully visible and stage flats partition off part of the stage into small rooms where only the actors go; the audience sees what occurs ‘behind the scenes’ via hand-held cameras that follow the actors. This is an inspired set-up that suggests a world of political intrigue, where the public façade of the Barons thinly veils their plotting…

For a production so experimental with design, it is regrettably unadventurous with the play’s central relationship. John Heffernan (Edward) and Kyle Soller (Gaveston) were boyishly besotted, seeing all in an amorous tunnel vision that alienates those around them. However, something more complex and nuanced was itching to be expressed about this controversial relationship. Indeed, the production was disappointingly negligent of the play itself.

Lines such as ‘Am I a King and must be overruled?’ hinted at the dramatic substance the audience desperately sought, but were given little importance in the spectacular scheme of things. The production often seemed like a theatrical spectacle. It was a dream for drama students looking to write an essay on set design, but an exercise in frustration for people wanting to understand the intricacies of the play. Although the acting was admirable, ultimately the audience felt somewhat cheated.

Heffernan portrays a broken man with a spine-tingling desolation that manages to make the Olivier theatre feel intimate. The energetic pace of the production slows to a haunting scene that pulls no punches when it comes to audience sensitivity. The rub of his body against plastic as he crawls towards his murderer echoes around the theatre: a disturbing and pitiful struggle. This is a tragically far cry from the enthusiastic regal swagger Heffernan presented at the beginning of the play, when he draws his long golden robe after him with determined arrogance.

There are some fine turns by other members of the cast, whose characters are swept up in a belligerent frenzy that has consequences for both sides. In particular Vanessa Kirby is intoxicating as Isabella, a woman scorned, wielding wrath and a bottle of champagne. Kirby infuses Marlowe’s verse with a tone of maternal mollification that entertains at first, but becomes desperately manipulative as her son draws further away from her. Events instigated by her anger spiral out of control, and she is turned upon by a fierce, youthful Prince Edward (Bettrys Jones).

The puritans among Renaissance drama enthusiasts will hardly be pleased, but more open-minded audience members will be entranced and intrigued by this chilling production. The real tragedy, however, is the lingering feeling that the production is never quite as adventurous with its characters as with its design. Despite this, it is worth seeing for Heffernan’s heart-rending turn, one that echoes Marlowe’s line: ‘All live to die, and rise to fall.’

Edward II is showing at the Olivier Theatre until the 26th October. More information is available on The National Theatre’s website: http://www.nationaltheatre.org.uk/shows/edward-ii 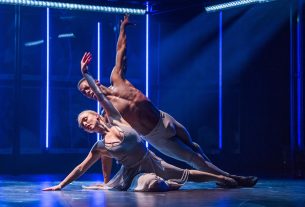 Review: ‘Fame the Musical’ at the New Theatre, Oxford

By no means just another Normal play