Don’t be fooled: it may revolve around a game, but this eerie novel is lightyears away from flippant frivolity. An intense read, it grips with an iron claw and took over my life for an entire slothful September day. Immediate warnings of a “cautionary tale”, a “confession” put me on red alert from page one. The story is scribed by a drug-pumped hermit in his thirties, who is still suffering the repercussions of a game played with fellow Oxonians during their time in ‘Pitt College’. But this was no casual game of croquet, instead a series of psychological dares designed to humiliate, and it’s not over yet.

In all honesty, the bare plot outline didn’t hook me. The tables turned after sixty seconds of reading into the novel: Christopher J. Yates can write, seriously. Deal clinched; afternoon’s plans aborted. The bent for writing came less from essaying for his law degree at Wadham, more from his admiration of Greene, Updike, Roth, Nabokov, Amis. “I love good sentence writers. Plot is all well and good but you can get good plot from movies, TV, etc. Only books can make your heart leap at the sight of a beautifully composed sentence.”

Stylistically, Black Chalk struck me as a slick creation. Let’s face it, bold Roman numerals slipped into paragraph indents as chapter markers were bound to appeal to this classicist reviewer. The flips back and forth from present to past were compelling, and the narrator’s colander-like memory ironically amplified believability: his shaky vulnerability seemed to earn trust. I asked Yates what he struggled with most while writing: “treading the line between sensationalism and reality. I wanted everything in the book to feel possible, plausible”. Scarily, he succeeded.

Perhaps the uni-happenings might seem too fast-paced, faintly ridiculous, with situations escalating more quickly than supposable. Then again, voilà Oxford: life at breakneck speed. Yates pencils a credible sketch of life here, even if some characters are shaded somewhat darkly. For a few, the game is just that: a game. But for others, victory is everything. Yes, at Oxford we’re driven to be success stories – a mindset inflated by Yates to the point of life and death. He commented “that compulsion to win that I describe in the story is absolutely something I observed all around me in my time at Oxford. Even an innocent game of cards could turn into a shouting match”. Observations were not inked until much later on, however. Yate’s first book deal came at the age of forty; he described his lack of creative writing at Oxford as “a great shame”.

The novel is not all glacial hardheartedness though; love does find its way in, and I even found myself laughing aloud at the caustic character Jack’s one-liners. Of him Yates said: “he’s vulgar and funny and utterly unabashed. Probably I enjoyed escaping from my own sense of politeness and decorum.” Self-indulgent it may be, but the humour comes as a welcome diversion from the more sinister goings-on.

It is an understatement to say that guesswork isn’t really a viable option to predict the book’s conclusions; by no means could its twists be foretold. “I found it a very difficult story for which to write a final page. Perhaps I didn’t want to let go of the story. It’s a very bittersweet moment when you finish a novel.” Sweetly bitter too is reading the ending of an immersive novel (though I can hardly claim the same extent as penning the finishing touches). Here’s to hoping that no such game ever actually arises amidst the dreaming spires. Black Chalk will be released on September 19, 2013. Available to pre-order on Amazon now. 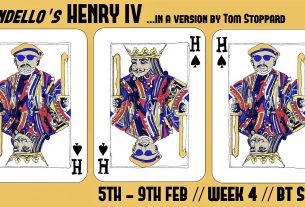