Director Jerusha Hess, producer Stephenie Meyer and novelist Shannon Hale have hit upon the perfect way of sexing up Jane Austen for modern audiences without accruing historical inaccuracies; take a few Austen-obsessed women and send them to an immersive Regency-themed holiday camp, the titular Austenland, where they abandon all mod-cons in order to be chastely wooed by Darcy-esque actors. Even the décor is wonderfully fake, all artificial flowers, cheap marble and colours too bright for the Georgian period.

Austenland is an unashamedly corny guilty pleasure, which, although it sheds the knowing allusions to Austen’s oeuvre which pepper Hale’s original novel, is dripping with laughs and clever enough to please all Austen fans, including the Colin Firth-devotee and expert academic.

Keri Russell (Waitress, The Americans) is Jane Hayes, 34, single, and a self-confessed Austen addict who has affixed the message ‘DARCY WAS HERE’ to her bed. Jane’s fixation with the gentlemen of yesteryear is out of control (her Colin Firth cardboard cut-out gets more attention than any prospective boyfriends), so, in a last ditch attempt to cure herself, she blows her savings on a trip to Austenland.

Entering the world of men in breeches, where mobile phones are ‘unmentionables’, proves less enjoyable than Jane had imagined and she has more fun breaking the rules by making out with gardener Martin (Flight of the Conchords’ Bret McKenzie).

But by day she must sip tea, practice needlepoint and make genteel conversation with Austenland’s actors and other guests, a hilarious supporting cast led by Jennifer Coolidge, or ‘Miss Charming’. Coolidge is outrageously forward and utterly out of place amongst the reserve of Austen’s world; half her lines are barely veiled sexual innuendos, the other half astoundingly stupid statements which betray her downright ignorance of the fictional universe she has intruded upon. It’s the perfect amalgamation of her performances in 2004’s A Cinderella Story and CBS’ 2 Broke Girls, and tops them both. Austenland’s prize suitor, Colonel Andrews (James Callis), and serial-visitor Lady Amelia Heartwright (Georgia King) are able to play off the irrepressible Miss Charming to great effect. King’s characteristic over-acting (she gave a similar turn in Wild Child) is totally fitting in this caricature-laden romp, though of course she plays second fiddle to Coolidge.

The straight heroine is a little lost among all the hilarity, but time is found for a slightly more touching story. Aside from her illicit romance with Martin, Jane’s curiosity is provoked by Mr Nobley (JJ Feild as a knock-off Darcy). Although this character is a less antagonistic copy of Pride and Prejudice’s famous suitor, the casting of Feild is a witty joke; in 2007 he appeared in ITV’s Northanger Abbey.

As most of the characters are actors at Austenland-the-place as well as in the film, it’s often difficult to tell who is real, and if anyone’s feelings are true. This concept drives the narrative by complicating Jane’s experiences, but also damages the audience’s ability to understand or sympathise with her.

A twist in the statuses of Jane’s love interests causes not one, but two final act chases. The first is an intelligent farcical parody of many an airport scene, which ultimately serves to emphasise just how conventional the second is, featuring the film’s worst and most clichéd dialogue.

However, this will be a crowd-pleaser by virtue of its Regency flavour, which marks it out from run-of-the-mill rom-coms, and is of course unmissable for Austen enthusiasts.

Pick of the Week: Once Upon a Time 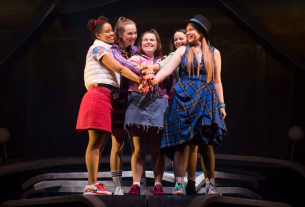 Review: The Band thrills in transporting us back to the ’90s