Woody Allen’s new film, Blue Jasmine, gathered a plethora of great reviews deeming it a sign of his return to the top form. The acting is remarkable, and the writing is as great and witty as only Allen can make it. The film seems to have left the audiences with nearly nothing left to desire.

The plot is inspired by A Streetcar Named Desire, the classic play by Tennessee Williams.  Allen sympathetically interacts with Williams in the same way that he has previously interpreted Dostoevsky and Shakespere.  The action focuses on Jasmine (Cate Blanchett), a classy woman who just fell from the top of the social ladder due to her rich husband’s (Alec Baldwin) criminal misdemeanours. Having nowhere else to go she finds shelter at her adopted sister’s house and fights to reinstate her lost position.

Allen focuses on a different type of desire than that portrayed in Williams’ play, a desire to possess and advance in society. If Williams’ Stella seductively descended the stairs in search of sexual fulfilment, Allen’s Jasmine preferred to find a thick wallet on its lowest step. This shift subverts Williams’ animalistic vision of humanity by changing the priorities from sex and sustenance to wealth and social position. Allen’s characters have their drives firmly focused on success. They tear the bloody scraps of social regard from each other’s teeth. They are determined, overwhelmingly unreflective, empty, artificially constructed and drowning in self-delusions.

As Woody Allen points out in an interview, ‘everybody is a little self-deluded’. He explores the boundaries of this view through Jasmine, who initially ignores the questionable ethics of her husband’s business and eventually experiences occasional blackouts and talks to herself. Allen portrays her efforts to separate herself from reality with both irony and compassion. He shows the consequences of her failed marriage, her repressed feeling of responsibility for the destruction of her family, her absurd behaviour and its impact on the other characters. The film makes it clear that when taken too far life in a bubble ‘is not that pleasant, really’.

However, when it comes to the main character’s fall Blue Jasmine lacks the cruelty of Streetcar. In Allen’s film, there seems to be nothing worth saving. There is no fragile Blanche who functions as the  last drop of hope, romance and aspiration in a vulgar, animalistic world.  She belongs to the past.

One of the characteristics of Allen’s late filmmaking is that he implies the deeper meanings he used to discuss openly in his brilliant, neurotic monologues. What might he say if he were to embellish this story with his explicit commentary? This seems to be what is missing from the film. Blue Jasmine, at times, feels like an acting exercise rather than a movie. It looks like a critique of the materialistic world which transformed relationships into impersonal deals based on position and income. Is that enough of a conclusion for a Woody Allen film? Blue Jasmine is intelligent and brilliantly acted but far from Allen’s best. 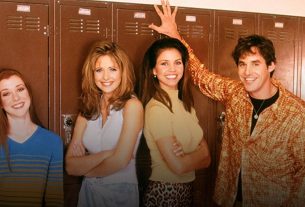 Buffy The Vampire Slayer is back – to mixed reactions