Police were called to St Peter’s College last night after an argument between two bop attendees turned violent. Two men were ejected from the first bop of Michaelmas term and were eventually subdued by at least a dozen police officers.

It is thought that neither of the men arrested were St Peter’s students, but were friends of an undergraduate visiting the college for the evening. After they were ejected from the room the bop was being held in, the porter was forced to call the police to remove them from the college premises.

“I am very grateful to the older years for not allowing the freshers to get anywhere close to the scuffle. The police and the porter were very professional in removing the rowdy guests from the college. The bop carried on and it was still a fantastic one, with every Peter’s JCR member having a good time.”

Singh further stated that elder students played a key part in keeping freshers away from the fight, ensuring that no harm came to Peter’s students.

Students were quick to praise the actions of all involved in dealing with the incident. Hashim Anjum, a second year Peter’s geographer said:

“I’m very impressed with the quality of the Oxfordshire police service – loads of them came and very quickly. By the end, there were upwards of twelve police officers for one guy.”

The incident may vindicate a rise in security at college bops, with Keble and Somerville recently choosing to hire bouncers at the events.

However, it was not a worrying experience for all those who witnessed it. Harry Noad, a second year Philosophy and Theology student, quipped:

“Watching the police officers storm through the festivities in the bar and JCR was a sight to behold. It might have been the most exciting thing to happen at a bop in my Peter’s career.” 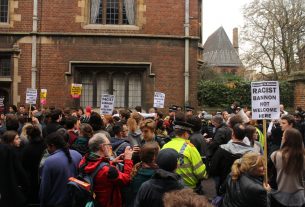 Bannon talk goes ahead as Union besieged by protestors