Musical theatre: a liberal serving of schmaltz with a side-order of corn and a generous portion of cheese.

Musical theatre: maudlin emotional metereology which tells us to keep looking Somewhere Over the Rainbow and go on Singin’ in the Rain (which, in Spain, stays mainly on the plain).

Traditionally considered the province of campery and capers, of Broadway belts and big finishes, musical theatre is in fact one of the world’s oldest and most daring dramatic forms. With several student musicals coming up this term, it’s time to take a fresh look at an unjustly derided form.

Ancient Athenian theatres echoed with the strumming of lyres as choruses sang and danced their way through tragedies and comedies alike. Just as in modern musicals, Greek choral odes were fully integrated into the action of the play. They explored characters’ dilemmas, commented on their decisions and highlighted the emotions involved, creating a vital empathetic link between the onstage protagonists and the audience.

The audience is at the heart of the musical, which is itself a ‘popular’ art form. From Molière’s comédie-ballet to Gilbert and Sullivan’s fiendish patter songs, from Rodgers and Hammerstein Broadway smashes to modern rock operas, musicals have always appropriated the musical genres familiar to their audiences, keeping pace with changing tastes. Meticulously constructed songs combine catchy melodies with lush harmonies and lyrics which are absorbed into our cultural DNA.

As the Ancient Greeks realized, musical theatre can combine comedy and tragedy, juxtaposing light-hearted numbers with incredibly serious themes. Chicago is an anti-feelgood step into a seamy, seedy underworld, while Rent explores issues of sexual identity in the context of HIV/AIDS. The Book of Mormon’s current success is proof of musical theatre’s provocative power to upset our expectations of the genre, which in turn can provide insightful comment on the nature of theatre itself.

Where The Producers pokes affectionate and outrageous fun at  the stereotypical Broadway musical, the self-referentiality of A Chorus Line and Cabaret blurs the boundaries between representation and reality as the stage, a locus for illusion, becomes the focus of disillusionment. Sex, violence and metatheatricality are part of musical theatre, just as much raindrops on roses and whiskers on kittens.

Musical theatre deploys every means of artistic expression in the service of one aim: communication; the sharing of a common experience. For a few hours, cast, crew and audience are emotionally bound together. It is accessible and immediate drama. The Rocky Horror Show is virtual community theatre.

Musicals appeal to all our senses and sensibilities, immersing us in a world of laughter, tears and cheers. They are often disparaged as sentimental, and with good reason; they glare into the human heart.

Through their creations, we experience nostalgia, idealism and recognition: bittersweet aching for an inaccessible past, furtive hope for a better future, and kinship with others… and those unforgettable tunes crystallize it all. A liberal serving of schmaltz with a side-order of corn and a generous portion of cheese? I’ll have a double helping.

After all, a spoonful of sugar helps the medicine go down. 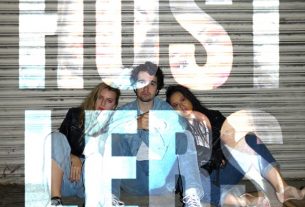 ‘It smashes through the fourth wall and begs you to help’: Hustlers at the BT

Stage design in Oxford: what’s it all about?