JCRs have backed OUSU in passing motions condemning the Vice-Chancellor’s recent suggestion that fees could be raised to £16,000.

In a speech last week, Vice-Chancellor Hamilton stated that: “a system of tuition charges more closely related to the true cost of the education provided is something that I believe in the longer run will have to be considered”.

New OUSU President Tom Rutland has been quick to condemn this suggestion and has called on Common Rooms to join him.

Despite the cautious wording of the oration, many have spoken of their fears of the consequences of this possibility on the university’s access work and its constant battle against allegations of elitism.

The Vice-Chancellor was not putting forward plans to increase tuition fees immediately, but rather that the cost of educating an undergraduate here was around £16,000, and that he believed eventually that there would be a discussion about whether the fees must be brought closer to that number.

Chris Ruckteschler, Merton JCR President, commented: “If the university in fact has a funding problem, we strongly believe rather than suggesting to use students as cash cows, the Vice-Chancellor should be lobbying for better public funding of higher education in the UK. England already has the highest university fees and one of the lowest public finance figures in Europe. Further increasing this trend is wrong, bad for us as students and bad for the future of the country.”

He continued: “Even though the remarks of the Vice-Chancellor have no immediate policy implications, we felt that it was important to send a strong message of opposition both to the Vice-Chancellor and the public in general[…] The idea of marketizing education that is inherent in the Vice-Chancellor’s remarks is, in our opinion, wrong and dangerous. Education is a public good that markets cannot price successfully.”

At the Merton Emergency General Meeting, as at other colleges, debate was heated. Whilst some stated that it was clear from the Vice President’s comments that he did not support a further rise in tuition fees, most worried that a change would damage access to higher education for those from poorer backgrounds.

Jack Morel-Paulo voiced concerns that even the negative press surrounding Hamilton’s comments would affect Access by contributing to Oxford’s privileged reputation, whilst Chris McCabe stated that a free market approach to university education was “worrying”.

Wadham’s SU President Anya Metzer commented, “Members of our student union talk about people who weren’t allowed to apply because they saw it as too expensive. The word debt is so laden with horrific connotations…it will have an adverse effect on applications.”

She added: “One of the biggest access myths is that Oxford is too expensive…it’s such a reilef to hear that it’s the same price as other universities.

“Even beyond access, there was a strong feeling from Wadham against the marketisation of university experience. He is suggesting a high street of universities – where Oxford is Fortnum  & Mason and the others are Tesco. The university structure should not be like a high street. It is about an education that enriches you and enables you to give back.”

Currently, it would not be legally possible for the University’s undergraduate tuition fees to be increased beyond the maximum permissible £9,000. For an increase to be considered, the fee cap would also have to be removed or relaxed; though this possibility is not much of a likelihood at the moment, a few JCRs thought the change a possibility in the future.

Robert Greig, OUCA President, is recorded in the minutes of the Magdalen JCR General Meeting on Sunday as encouraging students “not to abandon an evidence-based approach by passing the motion unamended” and to “approach this with wisdom and maturity rather than unthinking and uncompromising opposition”, adding that he opposed the motion until more evidence about the financial effects of such a proposition could be gathered.

President Tom Rutland stated in his email to OUSU members his belief that the coalition government “has undertaken an ideological assault on the public funding of higher education and made damaging cuts to the higher education sector”, leaving higher education with “inadequate levels of public funding”.  It was noted that England has the highest undergraduate tuition fees of public universities around the world, and that increasing these fees even further would likely cut off many of those from less privileged backgrounds from even considering an education at this university.

In response to these statistics, Common Rooms have variously voted to oppose a rise in tuition fees and further government cuts, in favour of Tom Rutland’s motion at the next meeting of the OUSU Council, and to mandate the JCR Presidents to sign a joint statement opposing the Vice-Chancellor’s suggestions. 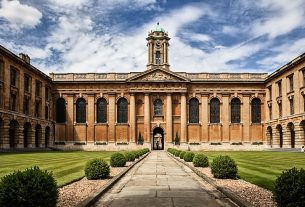