How fleeting forty minutes can seem when spent with the self-labelled “sociable loner” Louis de Bernières. Churning out a laugh a minute, our conversation was frankly bizarre. Spanning from blackbird transsexuality to a vicar’s ghost stories, charity-function cougars to Colombian machete fights, this Cheltenham chat was one for the record books.

Fresh from Louis’ poetry reading, I bounced over to the Writers’ Lounge to discuss his newly-published (and immensely enjoyable) Imagining Alexandria over a coffee. As I tinkered with my paranoid recording-combo of phone plus dictaphone, he told me of an interviewer who, having forgotten to turn on her dictaphone, had to repeat the whole thing with him the next day: “we’ve been friends ever since!”. His happy-go-lovely manner leaves me without a shred of doubt over this.

The inspiration behind this already-acclaimed novelist’s debut poetry collection was the Greek poet Kavafy, whose book is a full-time dweller in Louis’ pocket. Louis’ first trip to Greece might have founded a bit of an off relationship with the country: a week with a girlfriend in Corfu culminated in her dumping him. Promising? Louis didn’t let it put him off, and a few years later he returned solo. Round II was infinitely more successful, introducing him to Kavafy’s poetry set to music in a bar. While the first trip marked a romance’s end, the second struck up a lifelong love affair with Kavafy’s work.

Travel is something of a muse for Louis, whose “altered state of mind” from jetlag stirs up artistic currents. (Here I cannot relate: my jetlag is hellishly unconducive to productivity of any kind). He adds that the business class wine might have something to do with it. Aha. Admitting that “poems are things that occur to me when I’m doing something else”, Louis tells me of a recent one that he dashed down during a poetry-reading interval. Considering his novelistic success, it comes as a surprise that his poetry obsession preceded novel-writing; Imagining Alexandria has been decades in the making.

With Louis’ enthusiasm for history imprinted upon almost every page, I ask how this interest came about. Uni studies? Guess again. Louis’ curiosity for the big questions spurred on a philosophy degree, but the enthusiasm of his history schoolteacher Major Nelson was contagious, with each lesson commencing “When I was out in India…” (cue Louis’ brilliant reenactment of the booming decibels). Finding history a wonderful source of narratives, Louis gets a kick out of imagining people caught up in the historical process, “just ordinary people” – à la Thomas Hardy.

During the poetry reading, Louis was asked whether Donald Sammut’s illustrations in Imagining Alexandria meant that the poems can’t speak for themselves. After an aside on the “catty way of putting it”, Louis replied that the line drawings were one of the best things about the book in their way of complimenting the poetry. Louis had met Sammut, a hand surgeon, for an operation during which the latter did a quick sketch of Louis’ hand to much admiration. Louis commissioned him on the spot to illustrate his upcoming poetry collection. Check out page 75 for an especially beautiful drawing of a home inside a suitcase.

For Louis, agile penmanship seems in the genes: his father’s army officer occupation masked the poet-historian that he would have been, had he not been diverted by WWII. At first Louis followed his footsteps by joining the forces: a four-month stint packed up after it became “blindingly obvious” to all that he simply wasn’t officer material. Louis blames his resentment of being told what to do, which emerges again as the conversation turns to the role of Poet Laureate. Louis says he couldn’t hack it, point-blank, and mentions his irritation at how we didn’t have “our real poet laureate” while Seamus Heaney lived.

Louis’ professed enjoyment of visiting poets’ graves to “think morbid thoughts” paved the way for a little more nonchalant thinking-aloud: “I think it’s such a shame that talented people have to die. I don’t care much about the others.” As Louis and I flicked through his book afterwards, I pointed out the abundance of religious elements – stemming from personal beliefs? Not quite; he recounts his loss of Anglican faith at the age of eighteen after witnessing a young girl die in a railway accident. Comparing it to St Paul’s conversion on the road to Damascus, Louis describes his “blinding light of un-conversion” as he lost hope of any moral order. He blithely admits his melancholy habits: “the moment hormones flooded my body I was utterly miserable for decades.”

Joking aside, conversation turns pensive when he brings up the custody battle that followed his divorce. Louis’ poem ‘Every Other Weekend’ about divorced fathers losing their children was printed in the media, and his vociferousness led to him now having more than half custody. He describes the fear that they had been abducted from him in the divorce’s aftermath, and comments “love and sex are nature’s way of conning us into having children. Until you’ve had children you really don’t understand human love.

Imagining Alexandria gives leg-room to this wealth of feeling, voicing the heights of both happiness and sadness often on a single page: “I walk unharmed in the flames of joy and even the clang of silence stays unheard” gives way a few lines later: “You’ll remember it fondly”. It’s hard to give a nutshell of Louis de B, but his joie de vivre is certainly distinctive – a snippet of his own verse, “to taste life’s sugar on his tongue”, seems an apt concluding line to take. And of course, for the details on our weird and wonderful conversational topics mentioned at the top, email oxstu.culture@gmail.com as ever.

Imagining Alexandria, published by Harvill Secker, is available to buy on Amazon and bookstores now. 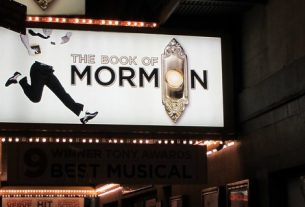 It was Mormon than enough: Book of Mormon at Palace Theatre, Manchester