I once saw a reviewer refer to the Young Knives as ‘chirpy’. Though it makes me laugh now, it was probably a fair description in 2006.

After all, they’d just released an album on which they managed to rhyme ‘pavilion’ with ‘Evian’, and ‘Virgin Mary’ with ‘marquis’, a fantastic feat by any lyricists’ standards. Yet there was always a much richer, more sinister vein in the Young Knives’ music, disguised under the resiliently light-hearted lyrics and melodies on tracks like ‘Tremblings of Trails’ and ‘Turn Tail’.

Maybe one of the key factors in this change is how the Young Knives recorded Sick Octave. The band crowd funded the production on Kickstarter.com, and free from obligations to a record label, they got a lot more experimental – they seem to have recorded some of their special effects in a military bunker.

The tracks differ wildly across the album, and because of this variation, it’s impossible to pin down the band’s ‘new sound’ in a handful of adjectives.

At one extreme, on ‘White Sands’, the Young Knives are louder, angrier and less inhibited than ever before, whereas on ‘Preset Columns Default Comets’, synth moans and soft white noise are laid under a baby’s whimpering. It could be called ‘Thom Yorke Experiences Fatherhood’.

The crying baby is something you could imagine on an earlier Young Knives album, but formerly, it would have seemed comedic; now, it’s incredibly sinister.

Is it because the humour’s gone? Definitely not. Watch the video for ‘80s-influenced single ‘Maureen’ or the unfathomable ‘Reproduction’ and you’ll see that they’re still hilarious (and kind of strange).

At moments, the band’s sense of humour still surfaces in their lyrics – on ‘Marble Maze’; for example, I’m pretty sure Henry’s describing how to play the Memorise the Tray game.

Nevertheless, more generally, something has changed, and I think it’s to do with playfulness.

The Young Knives are still messing about, but where it used to be with silly words and guitar slides, now it’s with reverb and white noise.

Sick Octave is less fun than the Young Knives’ earlier albums, but the more I listen to it, the more I like it.

2011’s Ornaments From The Silver Arcade disappointed me precisely because the band didn’t seem to be enjoying their own style anymore. They were making the same jokes with the same facial expressions, and yet no-one was laughing.

Now, they’ve found a way to drop the ‘tweed-and-corduroy’ self-mockery from their act without losing their distinctiveness, and they’ve gained a whole lot of intensity in the process. 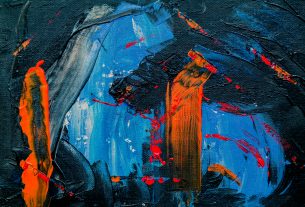 How art helps us transcend the grim reality of coronavirus