Women can have it all! They have access to education, the right to vote, they can have a career. This is the message that we hear in the modern world, yet does it match the reality?

A comprehensive statistical analysis of performances of women in STEM (Science, Technology, Engineering and Mathematics) from school-age and beyond indicates that almost equal numbers of girls and boys were entered for GCSEs and A-levels in STEM subjects, and that the girls outperformed the boys in almost all disciplines. Similar numbers of males and females complete science degrees, yet only 28 per cent of university faculty members in science are women, while only 8 per cent progress to becoming full professors. How can we explain the disparity at the highest levels?

Subtle messages regarding what is for ‘boys’ and what is for ‘girls’ are received from birth and will shape our perception of what is ‘normal’ and expected within our society.

Toys marketed for boys involve building, construction and problem solving (e.g. LEGO) whereas those for girls tend to focus on more caring, home-making pursuits, such as dolls and toy vacuum cleaners. Gender roles are embedded in our subconscious early on without us realising their significance, and sometimes more deeply than we would like to admit.

Toys are an excellent way to show children that gender roles aren’t fixed and stimulate an interest in science and technology.  RoominateTM, for example, involves building a toy dollhouse and decorating it, but most importantly you can take apart and reassemble furniture and even set up lighting fans and buzzers for the house using circuit boards, wires and a mini-motor.

We must also address the obvious: women reach a point in their career where they are moving into higher, managerial positions or awarded tenure track positions in academia at the same time as they are expected to start a family.

Wendy Williams, the founder and director of the Cornell Institute for Women in Science, argues that motherhood is the biggest factor for the dearth of women at the top levels, particularly in academia.  Her research has found that childless women are promoted and rewarded equally to their male peers.  However, females are twice as likely as males not to pursue an academic career due to having or wanting children.

The current societal expectation is that women will be the primary caregiver to their children, even if they decide to continue working once they become a mother.  Women are dissuaded from returning to the high pressure environment of academia, as they are told that anything that takes them away from the bench, particularly maternity leave, will reduce their success. As a result, a subtle message is being sent to the future generation of female scientists:  academia is incompatible with motherhood.

Last year, the UK government approved a plan to allow parents to share up to 12 months’ leave after the birth of a child.  Hopefully, steps like these will help remove some of the trepidation women may feel about pursuing a scientific career while being a mother.

Initiatives such as Athena SWAN, which is committed to challenging cultures and attitudes towards women in science, are incredibly important to begin to turn the tide against the vicious cycle of stereotypes. Closer to home, OxFEST (Oxford Females in Engineering, Science and Technology) provides a network of students and post-docs committed to gender equality in science, excellent talks and workshops touching on everything from body language and communication skills to having a career in industry.

The words ‘boys’ and girls’ should never be followed by “can/cannot” or “should/shouldn’t”. Similarly, school subjects should be gender-neutral. Giving children positive role models who are appraised on their achievements, rather than how they look, will instil a strong sense of self and the confidence that is needed for them to break through the glass ceiling.

Having recently started a DPhil in Physics, I had prepared myself for the excessive amount of drinking in Freshers’ Week and a constant need to impress your supervisor. One thing I hadn’t prepared myself for was the look of surprise when telling people what I actually studied! “But you’re not ugly!” or “But you’re a girl!” was their frequent reply and it got me thinking: why are there so few girls in science?

It is a well-known fact that STEM subjects tend to be male-dominated and this can be off-putting for many women. According to a recent report by Woman In Science and Engineering (WISE), only 17 per cent of STEM employees in European companies are female. More disturbingly, 30 per cent of women expressed a belief that worries about sexism in the workplace prevented girls from pursuing a career in science. Walking into a lecture theatre on your first day of university to find yourself being stared at by 100 men can be just a little bit daunting.

Misconceived stereotypes and male-domination are not the only reasons for women not pursuing scientific careers. A simple lack of enthusiasm and career advice plays an important role. The Institute of Physics (IOP) reported that only 20 per cent of physics A-level students were female in 2011 and 43 per cent of 16-18 year old girls stated that a lack of career advice led them to not pursuing science at a higher level.

STEM subjects can lead to many pathways; from broadcasting engineering and computer gaming, to robotics and device development. They can even lead to an acting career: Rowan Atkinson studied electrical engineering here at Queen’s.  Yet, many people, women in particular, only see science as leading to one generic laboratory-based career.

However, in the past decade, there has been a significant effort to try and encourage girls to study STEM subjects at a higher level and to pursue carriers in science. In 2012, the EU set up a campaign to provide better science education in schools for girls and to promote equal opportunities. “Science: it’s a girl’s thing”, although originally receiving lots of bad press due to an advertising video stereotyping girls as only interested in make-up and fashion aspects of science, have initiated a massive campaign to raise awareness of the importance of equality in science.

Furthermore, many outreach events with women involved have been organized by various universities and organisations, such as Athena SWAN, to try to inspire students to pursue science further. These events have been shown to really make a difference, with the IOP reporting that 19 per cent of secondary schools have managed to eradicate the gender imbalance by use of science outreach. Over 85 per cent of girls at GCSE level reported that having a “female role model explaining all the different aspects of science and the current research going on” made a difference. Thus, is a female ‘Brian Cox’ equivalent and public engagement the answer to getting women into science? It certainly could be. and I look forward to seeing how science adapts to this in the future.

Sarah Pine, the OUSU VP for Women, responds to the two articles: “Stereotypes do have a negative impact, which are much more powerful than we can imagine. Expecting scientists to be a certain type of person can be a big barrier to women in the field.”

“Oxford has worked on a couple of really exciting projects to encourage women’s participation in science. though there is still more work to do.”

“OUSU works with the university on Athena SWAN, but also runs the Women’s Leadership Development Programme, which is particularly useful for women in science because all sessions are outside of lab hours.” 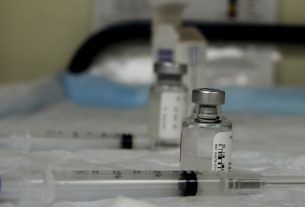 Oxford leads the race for a vaccine