The home leg of the Varsity jazz-off last Saturday was a roaring success. Two big band giants descended on Magdalen Auditorium for an intense contest of slick arrangements and bold solo chops: a jazz orchestra head-to-head. Tickets had sold out a good week before the night itself, and the atmosphere was suitably charged. This event has some history, and though it was my first encounter with a big-band-off I felt pretty sure by the time I had taken my seat that I had good reason to look forward to what was to come.

I did. It was Cambridge up first, in the form of CUJO (Cambridge University Jazz Orchestra). At times, their set was impressively intricate, including a rendition of Bob Florence’s composition ‘Carmelo’s By The Freeway’, which raced along in unforgiving swing, complemented by the precision of the horn section’s rhythmic fills.

CUJO were also unafraid to take on some of the more celebrated jazz repertoire including ‘God Bless the Child’: this was a tender arrangement worked out by one of Cambridge’s own. Joined by guest vocalist Hettie Gulliver, Charlie Mingus’ ‘Moanin’ and Ray Charles’ ‘Hallelujah I Love Him So’ were two further numbers which not only spot-lit the band’s evidently excellent sensibility for backing vocalists, but also said something of their versatility. By the time we had reached their Basie closer, the bar had well and truly been set.

There was nothing to fear, of course. For all the talk of versatility, OUJO were certainly not lacking in that department. The mercurial wit of ‘Sweet Georgia Brown’ was wonderfully executed, and their performance of ‘In A Mellow Tone’ was brilliant, loud, and infused with incomparable amounts of mid-tempo attitude. Yes, it was clear that the hometown heroes were not in the slightest fazed by their adversaries, and as the set continued I began to wonder whether it was simply the partisan spirit in me, or whether I could trust my growing suspicion that this band was swinging even harder than the last.

OUJO were blessed with two vocalist appearances, first with Will Gillett, whose great take on an ingeniously groovy reinvention ‘Wonderwall’ was matched by his idiosyncratic between-numbers commentaries, and second with Jessie Reeves,  who sang a beautiful version of Nina Simone’s ‘Feeling Good’.

Was there a winner that night? I saw little that was conclusive. But I was sold on these two great bands like everyone else there, and if you’re wise you will make sure you’re there next year. 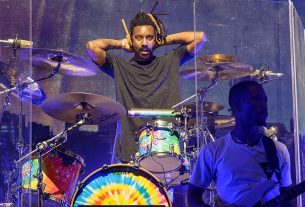