A manager is to be appointed to run Oxford’s Covered Market in a bid to boost its fortunes.

It is hoped that the proposed manager, who would be in charge of the 240-year-old centre, will not only help solve the rent issues between the property owners and shopkeepers but also improve the market’s cleanliness and advertising.

Shopkeepers told The Oxford Student that they felt the new manager would potentially  bring benefits.

Joy Hetherington, who both runs Oxford Aromatics and is a Director of the Covered Market Traders’ Association, said: “I think the introduction of a manager is a very good move by the council, who are finally admitting that they have to bear some responsibility.

“Nobody’s aware of the Covered Market.  It was originally designed to be tucked away but we are in a changing environment and we have to deal with that.

“There are therefore three things that need to be done. First and foremost, the market needs better advertising. Then we need more efficient marketing and finally a greater level of hygiene. If a market manager is able to achieve that then I am all for it.”

The move comes after the City Council took action to help the Covered Market by appointing an independent specialist marketing consultant to create a strategy for the centre.

Gillian Senior, the owner of The Hat Box, an independent boutique hat shop, suggested some ideas for advertising: “I think the entrances need to be more attractive. The council could also string a huge banner across Cornmarket promoting our market.”

However, Gillian expressed some scepticism with the Council’s proposed move. She said: “The Council has promised us staff before and it hasn’t materialised.”

Michael Feller, who has worked in the market for 35 years and is the owner of the butchers M. Feller & Son and Daughter, said: “We have lunatics running the asylum,” he said.

“Putting a manager in charge of the Covered Market won’t make any difference.”

He went on to voice some of his other concerns with the market. The market currently employs six porters to clean the market, but he claimed: “We don’t need six porters to do a two-man job.”

“Everyone’s got a job but no one’s working. The owners want more rent yet my staff haven’t had a pay rise in three years. It gets personal – it has done with the Council and it shouldn’t.”

Last year, the Covered Market was hit by a proposal from Oxford City Council to increase rents by up to 70 per cent. It was described at the time by some as “unsustainable for the majority of tenants”.

All the shopkeepers showed concern for the future of the market. When asked if the she thought the market had a reliable future, Joy Hetherington answered: “I hope so.”

Alexandra Clayton, who works at the charity Helen and Douglas’ House, said: “We obviously all want to preserve the historic and architectural significance of this building.” Gillian Senior added: “There are very interesting shops here. The market is old and authentic and that should help us.”

Feller called the Covered Market “a gem that you don’t have elsewhere”.

“I’ve worked here for 18 hours a day, seven days a week for 35 years and it’s sad to see that go to waste. I can’t see any future for the Covered Market.” 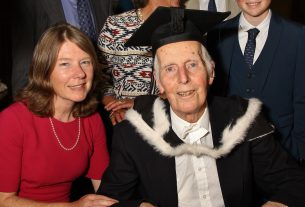 A century of progress?