‘A Night of the Absurd’ may not be the most comforting way to spend an evening but the experience is nevertheless very thought provoking. The evening, put on by Pembroke College Music and Drama Society, consists of two short absurdist plays: ‘The Misunderstanding’ by Albert Camus and ‘No Exit’ by Jean-Paul Sartre.

‘The Misunderstanding’ transports the audience to a guest house run by a mother and a daughter who have an unusual treatment policy towards their guests: they murder and rob them to survive. The plot takes a dark turn when the long lost son returns home but decides not to reveal his identity. An existential debate is presented to the audience as human values; the meaning of life is questioned.

This first play was enjoyable with some very strong individual performances. Helena Gilchrist completely embodied her role as the calculating and very unnerving daughter. She presented the two conflicting sides of her character in a convincing way leaving the audience feeling suitably uncomfortable. Scenes with Claire Rammelkamp as the rundown and tired mother were also particularly impressive. The other actors worked well together but some needed to moderate their voices more for the venue as a lack of variation in tone deprived their performances of some depth.

Meanwhile ‘No Exit’ depicts a version of hell: three characters are forced to live together for the rest of eternity. All three merit their place there and the play discusses more sober themes of the torturous nature of other people’s company and how people are perceived by others.

This performance was slicker than the first play; the actors worked particularly well together. Episodes on stage between Sophie Eager (Estelle) and Livi Griffiths (Ines) stood out as their interpretations of the two characters were clear and well executed. It is unfortunate that more was not made of the comic and satirical moments as they would have provided the play with necessary moments of relief.

Despite this critique both plays were technically well executed. The minimalist set and lighting did not detract from the action in any way and were just what they needed. Strong, incessant lighting added to the oppressive nature of both of the plays.

Overall the plays complemented each other very well as they focus on different aspects of existentialism. Despite some difficulties on stage ‘A Night of the Absurd’ is perfect for anyone with an interest in Sartre and Camus. 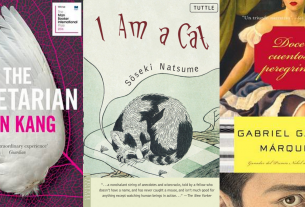 Around the world in 8 books