The 135 students who signed the letter attacked the way that the university dealt with the issue. The letter criticises the University for allowing Dr Ketland to remain in employment whilst the investigation of the allegations Coursier made in May 2013 was taking place. Dr Ketland is still employed by the university.

They pointed out that the alleged harasser had had “institutionally mediated contact with students since the university began its review.”

Dr Ketland has been teaching as a philosophy tutor at Pembroke College during this academic year.

It was also highlighted that the university had failed to provide adequate information to students who worked in Dr Ketland’s department. Graduate students in Philosophy, many of whom largely led the campaign for the open letter, were concerned that “the lack of comment [from the University] created a difficult atmosphere in the Philosophy Faculty.”

charges are not taken seriously”.

Luke Brunning, a DPhil candidate in Philosophy, said that “many students felt unsafe to be around [Dr Ketland]”.

“The Department of Philosophy has held a meeting with graduate students to inform of the outcome of the inquest into Charlotte’s death and to discuss any questions arising.”

However students spearheading the campaign, Jacob Williamson and Rachel Fraser, said: “The University’s statement is potentially misleading. The meeting referred to did take place, but students were given no details not already in the public domain concerning any review or investigation undertaken by the University. Details of the coroner’s inquest were given to students during the meeting. The results of the coroner’s inquest were, at the time of the meeting, a matter of public record. No one representing the Department or University attended the inquest. All questions concerning particular cases were met with an insistence that no comment could be made.”

The letter also raised the concern that “some students now fear that harassment charges are not taken seriously”.

Luke Brunning, a DPhil candidate in Philosophy, said that “many students felt unsafe to be around [Dr Ketland]”.

Many students and faculty members were not fully, if at all, informed about the events. Some learnt of the situation from colleagues abroad, whilst others only discovered the truth when it was published in the Daily Mail.

“Something has gone seriously wrong when members of a University faculty are not aware when one of their graduate students commits suicide after reporting one of their colleagues for harassment,” said Brunning.

Jacob Williamson, who led the process behind the letter said that the written protest  “began with an informal meeting of students in the Philosophy Faculty last Thursday evening. I guided a discussion and the desire to form a letter was clearly widespread.”

He said that the students had felt “obliged to act because of the lack of openness about this case and because we feel the University has not fulfilled its duty of care.”

The undersigned urged “the swift adoption of a suspension policy” in future cases of harassment reviews.

Sarah Pine, OUSU VP for Women, was a signatory of the letter. She said that “all students should have the right to live free from fear of abuse and sexual violence. Regardless of whether or not Ketland was guilty of anything, the University should have taken greater measures to protect students whilst they were investigating.”

Pine added that “the University has many options available for them to improve their current system”.  She suggested that they could strengthen harassment policies to allow for anonymous complaints, train tutors to recognise behaviours that are abuses of power, train harassment advisors comprehensively, and prompt the counselling service to provide group sessions on relationship abuse.

She also called on students to “engage with groups like WomCam and It Happens Here who can highlight what constitutes abusive behaviour.”

The letter predominately was signed by graduate philosophy students, but included members of the OUSU Women’s Campaign, It Happens Here, and alumni of the University.

It was first published on the Feminist Philosopher’s blog on Wednesday morning.

“A University review concluded in October. Its purpose was to inform senior members of the University of the circumstances of Charlotte’s death and to advise on any future steps. The findings of the review remain confidential but University is continuing to consider the most appropriate action as a consequence.” 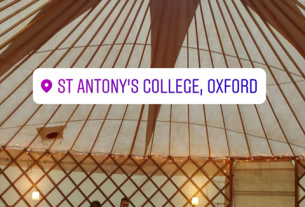