When Dallas Buyers Club was released in the UK earlier this year, I mentioned How to Survive a Plague as a superb companion piece, and with its DVD release coming on the 31st, the notice bears repeating. This is an extremely impressive piece of documentary work, and for those of us who did not live through the time of the AIDS epidemic in America and the UK when it first exploded, it is an essential piece of boundary-widening exposition.

Centring on a group of men and women operating in two of the main action groups who protested for better healthcare and government protection for AIDS sufferers in the 1980s, primarily those of ACT UP. The majority of footage is archival, interviews from television shows, news programs, and some of the most affecting footage being clearly personally filmed. These people, some gay, others not, talk to camera candidly about their efforts to cajole and force the American health authorities, principally the lackadaisical FDA, into trialling new treatments efficiently. Here, one of the main villains is the establishment’s decision to persist with the drug AZT despite voluminous evidence to say the way it was being used needed changing, and this also provides a major comparison point with Dallas Buyers Club, where the fictionalised viewpoint is very similarly put forth.

The men and women of ACT UP, and later TAG, almost uniformly come off very well from this account, which is fair enough given the ground-breaking progress they made, while the governmental agencies are fairly uniformly condemned. There is an absence, not quite troubling but rather mildly disappointing, of views from the inside – we hear from the highest ranks of the FDA, giving politically thought-out excuses, but no real insight into the rationales of the institutions. However, this does not feel like it is the fault of the team behind How to Survive a Plague; rather, it is the cowardice of those who were involved at the time which is to blame. Another small hitch is the obviously lower-quality recordings that are used. As most of the material was filmed in the eighties and early nineties, much of it on assumedly handheld VHS cameras, some of the sound is hard to distinguish, and the film could do with subtitles slightly more frequently than it uses them, especially in some of the more raucous discussions hosted by ACT UP.

Small issues aside, the film is a completely worthwhile whole, informative and interesting, and its emotional power grows as the ‘plot’ progresses. When you watch an entire conference hall come to its feet in support of AIDS sufferers, inducted into ACT UP, you will feel a fraction of the triumph and grief on show in the ranks of those the film examines – that is an achievement.

How to Survive a Plague is out on DVD 31st March 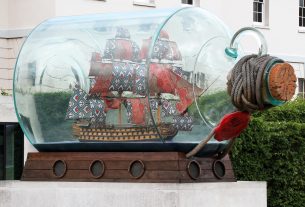 The ghost of London with Paul Cornell