Norwich six-piece and forerunners in the country’s rock scene, Deaf Havana, kicked off their latest UK tour last week. I caught up with drummer Tom Ogden to discuss shows, the music industry and America.

Following their hometown show in Norwich, which kicked off their tour, the band had a day of freedom before embarking upon an 11-date UK schedule. After a trip to Nando’s, Ogden stepped outside to discuss the events of the night before. “It was really cool,” he said. “It was really busy. We’ve been slogging away in different countries for months, so to come home and have that one show – it was really nice.”

With sold-out shows at London Clapham Grand and Brighton Concorde 2 to look forward to, Ogden is optimistic about the rest of the tour. “It’s gonna be really good,” he promised. “We’ve got some quite cool bands out with us [South Wales band The People The Poet, and Arizona rockers The Maine]. We’ll be playing some songs we haven’t played in a long time, and some songs that we wouldn’t normally play. It’s going to be quite a fun, old-and-new set.”

Old Souls dropped last October to really positive critical reception, as well as a great fan response. Following the departure of former frontman and vocalist Ryan Mellor in 2010, Deaf Havana made a stride away from the screamo that Mellor provided, wading comfortably into the rock scene. “I definitely don’t miss the older sound,” Ogden affirmed. “I don’t really listen to any music with screaming in it, because I don’t really like it. The only really ‘heavy’ band I listen to is probably Architects.” Indeed, since they stopped being a screamo band, Deaf Havana have continued to grow in popularity. “I think [the change in genre] has obviously has helped the band get more popular… it’s more accessible,” Ogden mused. “Kids bring their parents to see us now – parents just used to drop their kids off at our gigs, but now they come in and watch too, which is really cool.” However, the drummer was quick to point out that this was not the planned direction for the band. “It wasn’t a conscious decision. When Ryan left, we just said: ‘Well, we can’t replace him, and if we did, the new guy would always be compared to him, so we’ll just go on without him’.”

Since reaching #1 in the UK’s Rock Album chart with both 2011’s Fools and Worthless Liars and 2013’s Old Souls (the latter of which also made the UK’s Album Chart Top 10), Deaf Havana have found their mainstream popularity on the rise. BBC Radio 1’s Zane Lowe has dubbed both ‘Mildred’ and ‘Boston Square’ his Hottest Record. More recently, Deaf Havana were invited to participate in the station’s ‘Innuendo Bingo’, which has hosted such names as Will Ferrell, Olly Murs and Matthew Lewis (Neville Longbottom in the Harry Potter films). “It was one of the funniest bits of press I’ve ever done,” Ogden recalled. “I was soaking wet by the end of it. It was just so, so funny. James’ [the band’s vocalist and lyricist] laugh was just so funny: when he laughed, I laughed at his laugh as well as the joke. It was really good.”

Although Deaf Havana are well on their way to bigger and better things in the UK, the band’s recent experience of America was not so positive. Old Souls marked the band’s American debut, and the group devoted a large part of their January and February touring the States. The enormity of the tour appeared to have taken its toll on the group, who struggled to draw the crowds that frequent their UK shows. “It was hard, actually – a lot harder than England,” admitted Ogden. “We were in the van, and the drives… some of them were 18 hours, and then the shows weren’t very busy. It was a bit of a disaster really.” Despite this roadblock, the band are taking on the USA again at the end of the month, touring with You Me At Six until the end of May. Things are already looking up: the band’s shows in Los Angeles, Philadelphia and St Louis are already sold out. “The You Me At Six shows are usually like between 500–1000 people, so that’ll be cool!” explained Ogden.

Following this unfortunate American debut, Deaf Havana have been a lot more appreciative of this UK interlude. The band have been on the road for “months and months”, as Ogden put it – they played a few UK dates last autumn, before heading to Europe and America. “Before [Norwich’s show], we were a bit like: ‘Oh, this is getting old now, a bit boring’. But then we went on stage, and it was mental. It was like: ‘Yes, this is why we do it’. I think we needed it. You get more of a buzz when it’s your headline show, when everyone’s there to see you – it definitely makes you feel a lot better.”

Despite preferring to headline their own gigs, Deaf Havana have recently had the chance to act as support bands for some quite prominent music acts – Bruce Springsteen and Muse especially. “Bruce Springsteen was amazing,” Ogden gushed. “Obviously he’s one of our idols, and I got to meet him! It was nice, amazing. We did Muse as well, in Germany – that was really cool.”

As well as Springsteen, Ogden reflected upon other artists that influenced his drumming style. “My first album that I ever drummed along to was Nirvana. My dad bought me that album,” he reminisced. “Blink-182: I drummed along to that – or tried to. And the Foo Fighters, as well… Taylor Hawkins, he’s one of my favourite drummers.” Ogden is certainly allowed to let these influences show when he puts his own mark on the Deaf Havana sound. “James and Matty wrote the majority of the songs on Old Souls. They sent over the demos when they had those, without drums, so I put the drums on. I just added my bit basically – it was quite easy for me!”

I asked Ogden if this creative trust was something he considered important. The response was a very enthusiastic “definitely”: “If we didn’t trust each other, I don’t think we’d be anywhere. We spend 90% of our lives together, so we have to have that kind of trust, or we just won’t get on.” However, with a six-man strong team, it’s likely that these tastes can sometimes pose a difficulty for the group. “It sometimes clashes,” the drummer admitted. “Everyone has different tastes in music, and there’s six of us now. Max [keyboardist] is really into hip-hop and soulful, piano stuff, so he doesn’t really listen to a lot of rock.”

Deaf Havana have shown their versatility, jumping from screamo to softer rock, and Ogden is definitely open minded about the future of the band’s music. “A load of doors are open. We don’t really like staying in a place for long. Our next album will be different, and the next will be different again. We don’t really want to make the same thing twice. We try to keep ourselves – as well as the fans – entertained.”

Since forming in 2005, it’s certainly been an interesting nine years for the group. Starting at The College of West Anglia, the success the band went on to have was in no way predicted by its members. “I don’t know how I feel about it,” Ogden put bluntly. “It’s something that I’ve always wanted to do, since I was a kid, and now that it’s happening, it’s different to how I thought it would be. It’s mental to think about the stuff that I’ve achieved – and, like, I’m a guy from a little village just outside of Norwich, so to sell out shows and play with Springsteen and Muse… that just doesn’t happen to people like me.”

It’s not a very financially rewarding career path yet, though. “There’s no money involved in it – we’re all skint!” Ogden joked, when asked what he wished he’d known before getting into music. “The music industry is a very fickle place to work. You get stabbed in the back a few times, and it’s not very nice. But, as a unit, as a band, we all stick together; we’re all on the same page. If anyone pisses us off, we’ll all stick together as one, and that’s good. Especially nowadays, it’s a difficult place to start a career.”

The future of Deaf Havana definitely looks promising, with an even busier year ahead than last. “I just want to take the music all over the world,” Ogden commented. “You get to see all these places for free, so that’s all right! I just want to keep going, and going up levels – to keep getting bigger slots, bigger shows and more fans, really.”

Deaf Havana certainly look to be creating their own tradition. The band have played Reading and Leeds for the last three years and will be making their fourth appearance this summer. The band are taking to the Main Stage this summer: “The slot we’ve got is really good. Jimmy Eat World are on after us… we’re playing with some great bands. I really want to see Arctic Monkeys, as I haven’t seen them before,” an excited Ogden told me.

Following America, and what is likely to be a busy festival season, Ogden is not entirely sure what the plans are. “We’re going to head to Europe, do a headline tour there. There’ll be another UK headline tour, too. I don’t know if it’ll be this year or next, but there’ll be one to finish off the album. Eventually, we’ll go off and eventually do another [album]. After that, I don’t know… go work in McDonald’s or something?” Ogden hypothesised. “… I’m joking, I’m joking!”

Starting as they mean to go on 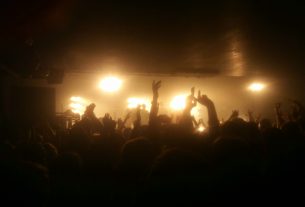