There is something that feels indescribably portentous about entering the US. It doesn’t matter if the customs officer is bored. It doesn’t matter if you’ve just got off an 8¾ hour flight with a 4 hour layover to look forward to, followed by another, 2 hour flight (apparently I’m rubbish at booking planes). It doesn’t matter if you’re so tired you feel like falling asleep where you stand, or if you’re entire world has been shaken by the amount of water in American toilet bowls. The words, ‘Have a fun time in America’, still give you a momentary thrill. This is the land of Hollywood, the Empire State Building, The White House, Vegas, Mount Rushmore, and, if their national anthem is to be believed, a population of very brave, very free people. The fact that my first destination is the home of a white, middle-class family in a sleepy Rhode Island suburb is immaterial. I’m in America for crying out loud!

To the well-travelled reader my enthusiasm may verge on risible, but this is my first time in the States, and I am determined to enjoy it. I’m going to take pictures of everything, buy an ‘I (heart) NY’ t-shirt if I can, and have cheese on absolutely everything I eat. In short, I’m going to thoroughly embrace American culture. Unfortunately, my good humour is immediately dented and my football-loving Britishness offended when I overhear some overweight, southerner talk about ‘that Wayne Rooney kick last night’. Grrr.

Rhode Island is the smallest state in the US and by the time I leave for elsewhere, I think I’ve heard at least 6 people joke that I had completely exhausted its touristic possibilities in the week I had spent there. I have visited Newport, Rhode Island’s famously upmarket former capital and seen the Newport Mansions, a breathtakingly luxurious group of extremely enviable cliff-top residences, only some of which are open to the public. One, The Breakers, is particularly stunning, sitting in 13 acres of well-tended garden with glorious views of the Atlantic. The town itself is a bustling example of New England’s refined class even out of season. Shop-lined avenues, tree-lined squares and a yaught-lined marina attest to the settlement’s wealth. Predictably, I found that self-professed distributor of genteel fashion, Jack Wills, had found its way to America.

I’ve seen the region’s beaches. In the summer, I’m told these are packed with sunbathers relaxing in the 30 degree heat. Now, in late March, the sub-zero temperature means I am very nearly the only person on them. Despite the cold, they have an expansive beauty and there’s something refreshing about seeing these enormous of sands so deserted. I’ve also sampled Rhode Island’s food; the state has the highest ratio of Dunkin’ Donuts per capita and in this respect, I have truly embraced American culture.

Boston was just an hour’s train ride away and as the depths of New England’s largest city cannot be plumbed in a day, I stayed overnight to fully appreciate its attractions. Faneuil Hall, a marketplace in the city centre, has served as such since 1742, although its collection of restaurants, diverse range of world food stalls, and large array of clothing stores were probably not present in colonial times. I could honestly spend all day there, but Boston has other sights to see and there’s only so much Mexican food you can eat.

For visitors, the Museum of Fine Art is a must. Its exhibition of impressionist work, innovatively displayed in accordance with an online survey and boasting Van Goghs, Rembrandts, and Monets among its impressive collection. The Isabella Stewart Gardner Museum, site of the largest art heist in history, is another for art lovers to check off their list, if only to see the stolen masterpiece’s empty frames left profoundly picture-less. Fenway Park, home of the Boston Red Sox, the Prudential Tower, with New England’s highest observation deck, and Boston Common, a delightful oasis of green at the heart of the city are just a few more visit-worthy attractions. And there are Dunkin’ Donuts literally everywhere.

From New England, I fly to Cleveland then take a shuttle to Oberlin College, a liberal arts school in rural Ohio. It’s known for being highly inclusive. The standard practice when meeting someone new is to find out their name and their pronouns; most use he/him/his or she/her/hers, but some people use they/them/theirs or even xe/xem/xyr if they identify with neither gender. ‘Gender is a social construst’, I am constantly told and although it takes some getting used to, one becomes to understand the need for this system of pronouns given the campus’ diversity.

Sexuality is similarly open for discussion. Some friends and I went to a ‘porn-bingo party’, where explicit content was screened on the wall, and party-goers ticked off the sex-acts listed on their sheet. I was told that people started taking their clothes off at the last one, but thankfully, my British prudence was preserved.

The college is not merely famed for its inclusivity, however. Its left-wing approach is also well-publicised. Most students are members of co-operatives, in which they eat, sleep, and work. I ate most of my meals in these, and at almost every meal formal discussion on the co-ops policies was prominent. Whether debating the number of gluten-free meals a month or disagreeing over the use of palm-oil in their cooking, people argue their opinion vehemently.

Away from its socio-political scene, Oberlin is elegant and cultured. Tappen Square, perhaps most picturesque in the summer when its trees are bedecked with green, is still arrestingly beautiful when leafless. The Allen Memorial Art Museum’s collection is amongst the finest university art museums in the US and the limited number of restaurants is surprisingly diverse. There isn’t a Dunkin’ Donuts in sight, however.

Boom! I want you in my (college) room

Sparking the flames of passion 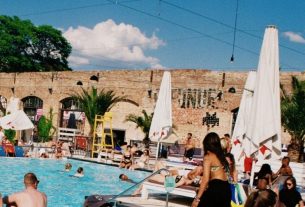