Three Oxford professors have signed a letter raising concern over the candidacy of Narendra Modi in the Indian general election.

The letter, which was published in last week’s Independent, drew signatures from a total of 75 professors at universities across the UK.

Narendra Modi, of the Bharatiya Janata Party (BJP), currently stands as favourite to win the nine-phase election, which constitutes the largest democratic vote on the globe.

In their open letter, titled ‘The idea of Modi in power fills us with dread,’ the 75 professors stated:  “We are deeply concerned at the implications of a Narendra Modi-led BJP government for democracy, pluralism and human rights in India.”

Generally considered to be the party favoured by Hindu Nationalists, the BJP currently stands in opposition to the Indian National Congress (INC).

The letter mentions the “extreme violence” seen in Gujarat in 2002, which resulted in the deaths of nearly 1,000 Muslims and occurred under Modi’s rule.

The letter went on: “A Modi victory would likely mean greater moral policing, increased censorship and vigilantism and more tensions with India’s neighbours.”

Modi has attempted to distance himself from the Hindu far-right during his campaign, focussing instead on his plan to revive the slowing Indian economy.

Modi’s opponent Rahul Gandhi has worked to draw attention to Modi’s ‘authoritarian’ vision, promoting his own vision as ‘inclusive’ and ‘empowering’.

Nikhil Ventakesh, a PPE fresher, said:  “Modi is a highly divisive figure who arguably has blood on his hands for his alleged involvement in sectarian violence.” 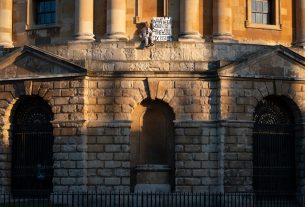