A new university sport is taking over the UK, and it’s not doing it quietly. This is the world of competitive cheerleading, and the Oxford Sirens are determined to have cheerleading better recognised as a sport than for its pom-poms. Unlike the view that most people have of cheerleaders, where groups of girls cheer on a male-dominated sport, competitive cheerleading is entirely different. No poms allowed, a group of up to 32 cheerleaders perform a two and a half minute routine, combining dance, gymnastics, and stunting.

Cheerleading initially started in American universities, where groups of men would chant encouragement for their sports team. Gradually jumps and stunts were included, and girls started to get involved. Everything changed when stunts started to become more elaborate, beyond that of a human pyramid, and competitive cheerleading began. These “All-star” teams are dissociated from other sports teams, and instead compete against other cheerleading squads. Competitive cheerleading only recently arrived in the UK, but has since boomed, with 825 teams registered with the British Cheerleading Association. Clearly, there is something about the sport that makes people want to get involved, and the craze doesn’t seem to be slowing down any time soon.

A routine is split into sections, such as stunting, gymnastics, dance, and energy. It is marked by judges who score technique, difficulty, and choreography, similar to dance or gymnastics competitions. Then there are deductions: wobble while standing on one leg in the air and having your other foot up by your head, 0.5 point deduction; fall to the floor from it, 2 points.

Gymnastics has become a major part of the sport, and it’s gymnasts that the Oxford Sirens are hoping to recruit more of for next year. “Almost a third of the points in a cheerleading routine are awarded for tumbling, which includes everything from forward rolls to backflips,” says president Emilie Heddle. “We tend to be limited in this category by the low number of gymnasts that join, but we don’t let that hold us back – every year we train beginners up to work towards basic flips. This year we reached a new high, managing to choreograph 18 front- and back-flips into our routine!”

It’s not just gymnasts that the team struggle to recruit, but men, too. Some university squads avoid this problem by having all-girl teams, but many, including the Sirens, prefer a co-ed squad. Men provide the power and height to stunts that is difficult to achieve with girls alone, allowing for more fun and impressive stunting.

A recent graduate, having been a member of the squad since his freshers week, embraces being a male Siren. “When I went along to my first cheer session, I really wasn’t sure it would be for me – I could see the sparkly bows and short skirts from a distance as I approached, and I nearly turned around and legged it. But I’m so glad I didn’t. Cheer is such an amazing sport; great fun, incredible for making lasting friendships, and it’s also far harder work than most of the rugby training sessions I’ve been to!” A postgrad, who has competed with the squad for two years, says “The girls are great, and make us feel really appreciated, especially after we catch them before they’d otherwise hit the floor.”

Although the men enjoy being the strength of the squad, they realise that not many people know cheerleaders can be male, but it’s gradually changing. “As a male cheerleader you do get stereotyped, but it’s growing so much in popularity that the stigma is shifting, and the male cheer community is really tight-knit as a result.” This year, the Oxford Sirens has seen an increase in males joining, with nine males to 25 females.

The social side of the Oxford Sirens is one of the main reasons that people stay. Having to trust each other to throw and catch a girl in the air makes a strong bond that only cheerleaders understand. There are weekly socials, such as both all-girl and mixed crewdates, boys-only pub trips, and movie nights. This year has seen a variety of people join, with a mixture of undergrads, postgrads, internationals, visiting students, and even a fellow. It’s easy to join: this Trinity sees the first ever Cheerleading Cuppers, so everyone is urged to try out some stunting at free sessions all this term.

For more information about sessions and Cuppers, please email emilie.heddle@st-hughs.ox.ac.uk. 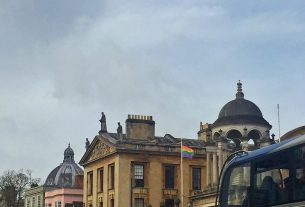