The event was hosted by Just Love, a Christian student social justice group in Oxford. It aimed to promote ‘Stand for Freedom’, a national campaign to raise awareness of the 27 million people who are currently in slavery around the world.

Those taking part stood from 9am on 7th June through to 12pm on 8th June. They rotated in shifts, with one student – Izzy Morse, a first-year from Regent’s Park – standing for the whole 27 hours.

“Personally I would say what amazed me was people’s apathy about the situation; people didn’t want to be bothered about it,” she said.

“There was a good number who supported us, but also a huge proportion of people who would literally answer ‘no’ to the question ‘will you help me stop slavery and sign a petition?’. The amount of people who joked about how they wished the women on team were for sale was astonishing. People’s responses at times were scary!”

She went on to explain the cause. “There are actually an estimated 29.8 million people being held in slavery today, according to the most recent Global Slavery Index, 26% of which are children.”

“The whole time was emotionally and physically gruelling, I can hardly walk now my legs hurt so much but it was also an absolute pleasure. These people have their whole lives taken away from them so I can definitely stand for 27 hours for their cause!”

150 different groups have taken part in the wider campaign, with Oxford being invited to take part this year. Aside from physical protest, students were also petitioning, photographing people who stood, selling fair trade food and bracelets made by trafficking survivors. They were also stamping people with ‘Not For Sale’ barcodes, and some also joined in a flash mob.

Ben Coulter, a student who took part in the flash mob, said: “It was an amazing day; I think we got around 800 people to sign our petition, we had a great flash mob, we were selling fair trade goods, and just generally raising awareness about modern day slavery by talking to passers by!”

Hannah Coates, a third-year from Jesus, runs Just Love’s Human Trafficking Action Group, which has representatives across the colleges. She said: “The idea of Stand For Freedom came from the charity International Justice Mission (IJM) who send lawyers and investigators to work in many countries around the world in order to assist local police officers and legal professionals in rescuing victims of trafficking and prosecuting their traffickers.

“I think it is really important that we, as Western consumers, know that trafficked people are often used to pick, dye and spin the cotton which makes many of the clothes in our favourite shops. There is no simple solution to trafficking in supply chains but there won’t be a stop to it unless consumers demand change and improvement.”

Pheobe Scott-Green, also part of Just Love, explained that one person was always standing on the monument, either tied or gagged “to symbolise that those enslaved really don’t have a voice, so we have to speak up on their behalf”.

She went on to say: “It was just staggering how many people think slavery was abolished with William Wilberforce, which it was, but that they don’t know that despite this there are more slaves alive today than there were in the time of Wilberforce.”

Peaceful vigil to be held outside Union 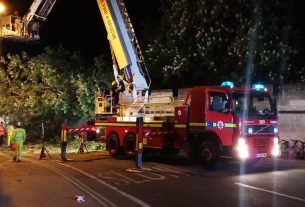 Tree falls down on Longwall Street