If you’ve paid any attention to athletics over the last few seasons, you might have noticed that there has recently been a lot more positive things to take from British sprinting. To be frank, British athletics on the whole is looking in better shape than it has for a long while, with the likes of Mo Farah and Jessica Ennis-Hill hitting the headlines with their stunning performances. But these athletes are respectively a long distance runner and a heptathlete. What’s new is that British sprinters are now achieving success on the world stage.

This hasn’t been the case for quite some time. It was way back in 1992 that Linford Christie became Olympic Champion, and since then no other British man has achieved the same feat.

With people like Usain Bolt on the track, there are limits on how optimistic we can get, but there is no doubt that there are Britons in the mix that can realistically challenge for the big medals and have already managed to seize some in fact. Adam Gemili became the pin-up of the hopes of thousands of British athletics fans who have been waiting for years for victory in a senior global championship when he won the World Junior Championships in 2012, running 10.05 seconds. It was only a matter of time, it was said, before the 18-year old would run under the 10-second barrier and move one step closer to the fast times of the world-leading Jamaicans and Americans. Although the sprinter has not yet run under 10 seconds, he has run under 20 seconds in the 200m, running 19.98 in last year’s World Championships and, repeating this performance at this year’s European Championships, storming to his first senior gold medal at the age of just twenty. What’s even more impressive is that Gemili’s winning time was run into a headwind of 1.6m/s; on a still day his run would have equated to 19.90, which would have broken John Regis’ long-standing British record.

Adam Gemili’s not the only British sprint star on the track. James Dasaolu came to the fore last season at the British Championships, clocking 9.91 seconds – the second fastest time ever by a Briton and faster than even Usain Bolt had run at that point in the season. Earlier on in 2013, the Londoner had grabbed the silver medal in the European Indoor Championships. At this year’s European Championships in Zurich, Dasaolu sprinted to golden glory in a time of 10.06 seconds, making 2014 the first time since 1998 that British men had been the champions of both the 100m and 200m at the European Championships. At the start of this season, at the World Indoor Championships, Richard Kilty came through to win a shock gold in the 60m in a time of 6.49 seconds, beating Jamaican double Olympic relay champion Nesta Carter. Chijundu Ujah is also a new name on the scene; the 20-year-old this year ran a surprise 9.96 seconds and has now joined the list of British sprint favourites.

Still, it’s not just male British sprinters that are making headlines. Young female Brits are also sprinting to success. In this year’s 200m European Championship final, three British women lined up at the start line, in an event in which there had been no British woman since 1982. Jodie Williams, who first made the headlines at the age of sixteen when she became the World Youth Champion in both the 100m and 200m, has finally made her mark as a senior athlete on the world stage, winning Commonwealth silver and European silver this summer. Her time of 22.48 at the European Championships is the second fastest time run by a British woman since 1984. Bianca Williams (no relation) is another one to watch. The Enfield and Haringey athlete (also 20) ran a strong 22.58 behind Jodie’s 22.50 at the Commonwealth Games to get the bronze. The ladies’ British sprint team now has several youngsters in the mix, with Dina Asher-Smith (18), Desirèe Henry (19), Asha Philip (23) and Ashleigh Nelson (23) (who finished in third place in the 100m final in Zurich) that all look promising.

The combined effort of these young stars is proving positive for Team GB in the relays. Although the British men sprinted to victory in Athens 2004, since then, it seemed they would only be fated to dropping the baton and messing up relays. Fortunately however, in the last few relays both the men and women have done pretty well. Both teams medalled at the Commonwealth Games, with the men coming in second to the Jamaicans and the women rallying together for the bronze. In this month’s European Championships, the women – with an average age of just 21 – sprinted to valiant victory in 42.24 seconds, breaking a 34-year-long British record. The men won their final in 37.93 seconds, not far off the 37.73 British record set in 1999.

So, to what can we attribute these impressive success stories?

Kes Salmon, a senior coach at the Manchester Harriers and Athletics Club, attests the improvement of coaching in British athletics to have played an instrumental role. Athletes now having a firm coaching structure; with most of them based at the Loughborough University training camp, where they are aided by some of the best figures in sports science as well as their own nutritionists. Training together helps them push each other whilst athletes are now also helped by lottery funding.

Our problem in the past, he considers, has been that many athletes were not full-time track athletes. Unlike the United States, many of our athletes had part-time jobs and so could not commit in the same way to the sport. Furthermore, unlike Jamaica, we don’t have enough people to scout out new talents.

It is between the ages of 16 and 19 that youngsters truly decide whether or not they want to pursue athletics. If at this stage athletes have friends who are interested in another sport, they may choose to turn their backs on athletics but it seems that there are now more talented teenagers who are truly committed to the sport. Adam Gemili transferred from football only a few seasons ago and has now completely committed to athletics. This change has certainly proved worthwhile. Many experts are tipping Gemili for a medal in Rio 2016, and point to Jodie Williams and Asha Philip as our best hopes for the women sprinters in Rio. Women are certainly being taken more seriously in athletics and this has definitely had an impact on their current performances.

Christine Bowmaker, who coaches both Jodie Williams and Asha Philip says, concurs; saying “coaches are becoming more professional in everything they do. You’re looking after young people’s lives, and you have to appreciate that. You coach the event, but you develop the person.”

Bowmaker knows what she’s talking about. She also coached Vernicha James, who won the 200m World Junior Championships as a teenager, but is now nowhere to be seen. The case has been much the same for other British sprinters who have triumphed as juniors but have failed to win titles as seniors. Adam Gemili and Jodie Williams are turning those tables.

Former British sprinter and multiple medallist Darren Campbell takes the same view. “I’ve seen a different way of thinking over the last five or six years. Some of the work the old-school used to do works to a degree. The new stuff polishes it off. Look how polished the techniques of the girls are. The guys are going the same way. We should have a conveyor belt of talent.”

So, with these expert analyses and the performances to show, it seems we British athletics fans can prepare ourselves for a tide of titles with the Union Jack on the side. First stop, World Championships in Beijing, 2015! Then watch out, Rio! 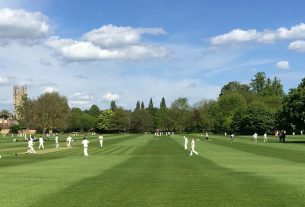