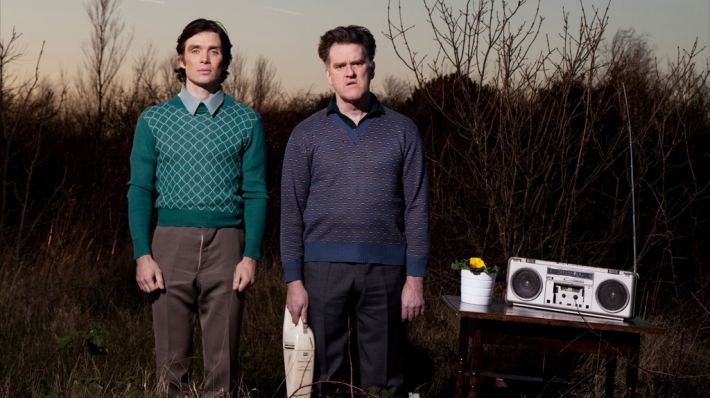 Directed by Irish playwright Enda Walsh, Ballyturk is a frantic philosophical drama about two men – Cillian Murphy and Mikel Murfi – leading a somewhat hysterical existence. At least for the first thirty minutes it is, as the National Theatre describes, ‘gut wrenchingly funny’.

Walsh’s imaginative interpretation of life in a small Irish town is ingenious; made wonderful of course by a brilliant all-star Irish cast, which one might surmise drew intuitively on their own backgrounds to deliver an authentic portrayal of provincial Irish life.

Together Murphy and Murfi make a lively pair: shouting, climbing, and running, jumping and dancing all over the stage. Over time, the play becomes less amusing: things quiet down, the mood turns slightly somber, and Walsh’s wit registers as an antidote to an intense performance.

Levity becomes a necessary relief to the rollercoaster of existential muses, batty surrealism and the looming themes of nihilism and entrapment which at times Walsh takes too far. Forgivable, if you enjoy appreciating a paradox over and over.

Only towards the end does it become obvious just how well Walsh illustrates the absurdity of everyday life. From the beginning, we are invited to laugh and interrogate two seemingly weird characters. Murphy and Murfi act out what they think is out there in Ballyturk. That is to say what is out here, in the real world.

Yet at a closer glance, it becomes apparent that they are only as odd, unsure, and delusional as those of us in the theatre. To that end, the ghosts of Wittgenstein and Sartre are ever present. Both characters exist in the confines of their limited language and environment, hardly able to interpret and express the complexity of life.

All that said, one is careful not to arrive at an early judgement. Ballyturk is anything but transparent, and the merit of this production is surely in its ambiguity and density, and the fact that despite its inherent complexity, it remains accessible for those who came to laugh rather than contemplate their position in the theatre in relation to the cosmos. In short it starts Irish and ends up very French. I know which I prefer.

Ballyturk runs at the National Theatre until 11th October