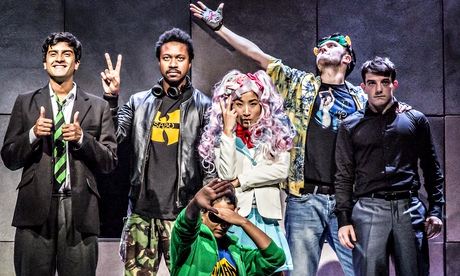 Review: Teh Internet Is Serious Business

The morning after I saw Tim Price’s new play, Teh Internet Is Serious Business, I logged onto the Internet as I do nearly every day and – nothing had changed. Price’s latest offering is a bold experiment, but one which left me with little more than a sugary aftertaste: it simply wasn’t serious enough to make the threat of Internet hacktivism tangible.

The piece follows the rise of Anonymous and LulzSec, groups of hacktivists who met on the internet, rewrote the rules, and took down the biggest forces of modern capitalism with their collective knowledge.

A talented cast of fifteen play a host of hackers, memes, and websites, in an attempt to portray the world of the internet on stage. Coding sequences become dance sequences, full-on costume is used to embody popular memes (real life troll face was a particularly favourite), and interactions change in an attempt to make web communication look human

Director Hamish Pirie’s creativity was commendable, and the anarchic energy of the internet playground was vividly brought to life.

There is a flaw, however, in attempting to make web culture understandable to your typical Royal Court audience member, which is that the point feels laboured if you are of the generation with a basic grasp of sites like 4chan.

Very quickly, the sound and light show which lays bare months of research from Price is no longer enough to sustain interest, and you begin to notice how unsuitable the story being told is for the theatre. There is very little drama in Anonymous’ rise to Internet power: one by one they take down various websites, meeting no real resistance, until the arrest of the two leads which brings the play to an abrupt halt.

The best scenes took place in 15 year old Moustafa’s classroom, or in Jake’s struggles with Agoraphobia; in those moments, I realised that what I was craving was a touch of humanity and empathy – moments which were too few and far between.

The Internet was not a serious business. Nothing felt very real or scary amongst the continued trolling and lolz, and that was precisely why the next morning, when I logged into Facebook, I’d already forgotten what I’d seen last night.

Price missed a trick in not showing enough of the real lives affected by hackers and trolls, creating a piece that was far too fantastical and trifling for my taste. As an interesting experiment, he is to be commended. I hope more plays will engage with the online world as creatively as Price has done with his latest piece.

But what I learnt is that, just as the internet had to leave the bedroom at the end of the play, a play has to leave the internet and show some real lives if it is to engage thoughtfully with our world as a piece of drama.

Teh Internet Is Serious Business runs at the Royal Court Theatre, London, until 25th October