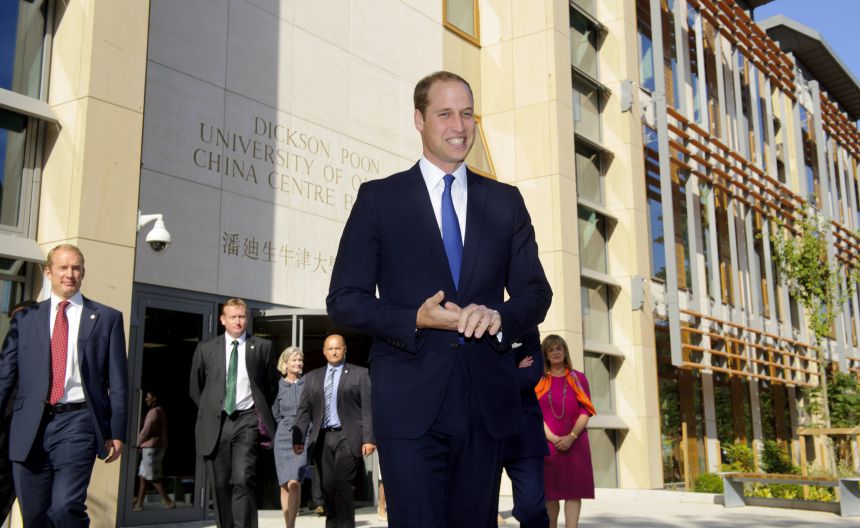 Prince William paid a visit to Oxford on the 8th of September to formally open the Dickson Poon University of Oxford China Centre building.

The ceremony took place hours after an announcement from Kensington Palace that the Duchess of Cambridge is expecting her second child. She was unable to attend due to acute morning sickness.

Prince William met with students, members of staff, and friends of St. Hugh’s, as well as the donors and architects behind the project, before being given a tour of the new building. He also took part in the traditional Chinese ribbon cutting ceremony to officially open the centre, before a plaque was unveiled bearing the names of the Duke and Duchess.

The building, situated in the grounds of St. Hugh’s College, cost a total of £21m to build, £10m of which was donated by Mr Dickson Poon CBE, after whom the building is named. It features a one-hundred seat lecture theatre, dining area and a range of conference and seminar facilities, as well as 63 ensuite bedrooms for the use of St Hugh’s students. Also included is a library set to house books from the Bodleian Library’s China Collection.

Prince William said at opening: “’The China Centre is an enormous achievement. It stands on the foundations of many centuries of learning in the University of Oxford about China, and it marks a significant leap forward.

“The strength and creativity of the partnership between the University and St Hugh’s provides a solid foundation for the creation of what has the potential to become the foremost place of study about China in the world.”

“Learning from and learning about China has never been more important than it is now. China is one of the world’s oldest civilisations. Its long history, customs and artistic and technological ingenuity have endured as a source of fascination and wonder in the world.

The globalised world that we inhabit and that we have both helped forge, underscores the importance of deepening our knowledge and appreciation of one another. In an ever turbulent and changing world, the dialogue that academia can foster is not merely a nice-to-have it is a pillar that supports peace and prosperity.”

Mr Dickson Poon added, “I believe China will become an even more significant world force this century, requiring a deeper understanding by the West. Oxford already has a proud history in the study of China, and I was delighted to make this gift to help advance knowledge, collaboration and understanding in all aspects of Chinese culture.”

One St. Hugh’s second year student commented, “Ohmygod, [sic] Prince William is ridic [sic] handsome in the flesh. Also, I better be getting one of those new ensuite bedrooms.”