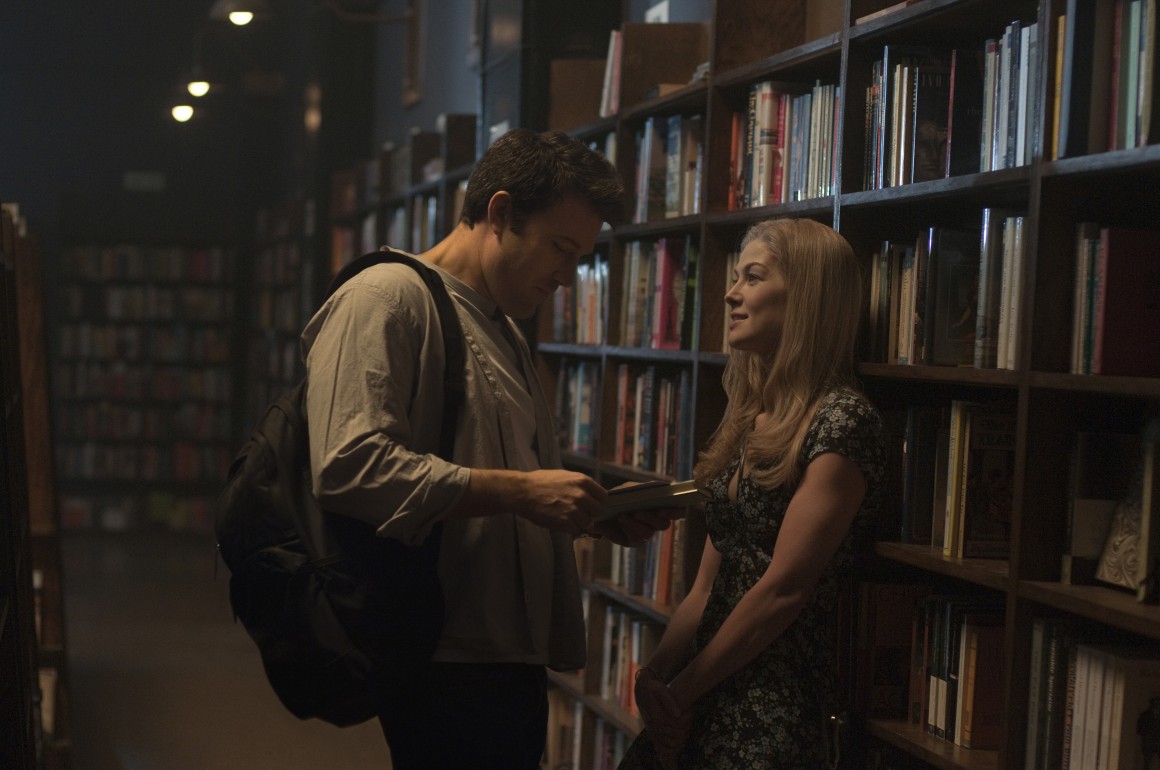 Only one word can really describe how I felt leaving the screening of Gone Girl this week.

The story begins when protagonist Nick Dunne (Affleck), receives a call from a nosy neighbour whilst at work, alerting him to the fact that his front door is wide open and his cat is sat outside the house. Nick returns home to find his wife, Amy (Pike), gone and glass tables overturned. It’s Nick and Amy’s fifth wedding anniversary and something is amiss.

The police are called and an investigation follows. This investigation soon becomes America’s biggest news story as the media discovers that Amy, a beautiful New Yorker, and the inspiration for America’s favourite children’s books, Amazing Amy, is presumed to have been murdered by her cool and calm husband, Nick.

I did not kill my wife. I am not a murderer.

These two phrases are repeated again and again by Nick as he becomes the primary suspect in the investigation into his wife’s disappearance. As time goes on you begin to hate Nick more and more as it becomes glaringly obvious that he has been lying to the police and is withholding information.

True to the book, this film is told from the alternating perspective of Nick and Amy. Nick’s narrative is told in the present, whilst Amy’s gives us a glimpse into how the relationship between Nick and herself has developed over the course of their marriage. It is from Amy’s narration that you begin to see the cracks in Nick’s story – or is it the other way round? Is Nick lying? Or is Amy lying? Maybe they’re both lying? (Good luck trying to wrap your head around this one.)

You ever hear the expression that the simplest answer is often the correct one?

Actually, I’ve never found that to be true.

Keep this in mind when you think of Gone Girl, because I guarantee that you will not be able to predict the outcome of this film. Around half way through this film, a huge plot twist is revealed that changes everything. Prior to this game changer you’re probably thinking that you’ve got it all sussed and wondering how they could possibly drag out the outcome of this story for another one and a half hours. Perhaps if you’re a thriller fanatic, you’re still not quite convinced that all is as it seems, but either way, you won’t be prepared for just how dark and disturbing this film gets. When you think that this story has reached its peak, it just gets darker and darker and darker to the point where you begin to seriously question the mental stability of the scriptwriter, and author, Gillian Flynn. How could someone write a tale this disturbing? Possibly the most disturbing thing, however, is that this film ends with a cliff-hanger – the story is not over and I dread to think where Fincher and Flynn will take us next.

Quite simply, this film is a masterpiece.

Gone Girl combines a darkly chilling tale that cleverly analyses some of the big questions of our time (including gender stereotypes, marriage, even the obsession with celebrity) with a near perfect cast and script, all of which is delivered under Fincher’s brilliant direction. Rosamund Pike’s performance as Amy will stay with you long after you have left the cinema screen in what is probably one of the most mesmerizing performances of the year, which places her as a serious contender for ‘Best Actress’ at next year’s Oscars. Gone Girl also stands in good stead to be nominated for numerous other awards, Best Score, Best Editing, Best Director and Best Picture just to name a few, but with a few months to go, we’ll just have to wait and see. Impeccably crafted, this is not one to miss.

Student Poetry: ‘In Memoriam’, composed in the remembrance of the Manchester bombing