Warning: mysqli_query(): (HY000/1030): Got error 28 from storage engine in /home/oxfordst/public_html/wp-includes/wp-db.php on line 2007
 Notes from the Dressing Room – The Oxford Student
Skip to content 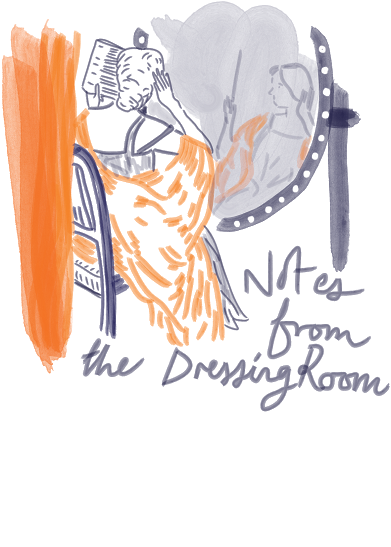 There are a few things in life you learn from your mother. Morals, unshakeable stubbornness, and how to make a meal out of two eggs and four tins of stockpiled, just-in-case-there’s-a-nuclear-fallout food are amongst them. My mother also taught me two other (arguably) valuable skills: namely, a mean left hook, and how to put a tape measure to the right nooks and crannies of the human body, and somehow come out of the end of the process with a wearable garment.

I got straight to putting one of my maternally-inherited talents to work this week, plunging into Michaelmas with gusto: at the first read-through for what promises to be one of the O’Reilly’s most sophisticated and raw Sondheim productions yet, 7th week’s ‘Assassins’. And no, that doesn’t mean I ended up lamping any diva-stropping actors (they’re a lovely bunch, and very down-to-earth, which is something that continues to surprise me about Oxford thesps); but it does mean I had to whip out my tape measure and swan around, Edith Head-style, explaining why I’m just different to any predecessors who might have been satisfied with a quick bulk-shop in Primark. I doubt I’ll ever actually need to know your “Body Rise” inches, but it makes me happier to know I have the distance between your waist and the biggest part of your bottom available in a spreadsheet… you know, just in case. You ask for an OCD dressmaker, you definitely get.

Costume Directing an Oxford production is a brilliantly multifaceted role, one that grapples with a number of necessities, and I’d recommend it to anyone interested in theatre here who knows a thing or two about sartorial psychology (i.e. why we wear clothes, rather than just how we wear them – not too difficult to research, and some people have a knack for it, without needing to break out the Roland Barthes). For a start, it gives you an inside track on all the shenanigans going on in the glittery world of Oxford drama (who doesn’t want to know all the red curtain gossip?), and a means of perceiving how a production is put together without the added pressure of trying to harness the whole thing yourself straight away – great for people starting out in these intense climes! It’s also very creatively demanding and satisfying – but that doesn’t just mean pretty pictures of nice dresses; concept sketches are only the starting point.

After that, there’s measuring, sourcing the costumes, making some of the more specific garments (a sewing kit and machine are handy items to have around). And, of course, there are the wonderfully talented people you get to work with…in most cases, the wackier the better: for example, a certain director who rose to acclaim last year with a brilliant production of a John Ford play is returning to form and bringing some feathery friends along with him this time… although, luckily, I’m not required to make any costumes for the birds (at least, I hope not). That said, he does have me constructing animals in some fashion…

In any case, we’re not even a week into MT, but already the backstage corridors of Oxford’s luminous theatre world are raring to go. This morning saw a bleary-eyed coffee shop contingency of ‘West Side Story’ production team members putting together what promises to be the Playhouse production to see in Hilary, and I’ve already learned that concept sketch delivery is so much better when aided by superlative hot chocolate. With marshmallows. ‘Assassins’ sketches are currently midway through completion and scattered around my room, possibly where there should be critical editions of the works of Edmund Spenser instead, but hey – it’s not like the drama people here do degrees or anything. And I’m in the process of acquiring the sexiest sewing machine I can budget for, except the guy on the end of the John Lewis helpline doesn’t seem to care about the fact he’s dealing with a Playhouse costumier (ugh).

In the meantime, however, this is me over and out – I’m off to measure the cast of ‘Jersualem’ (which may just be the most fantastical and intense production to have ever held a fourth-week O’Reilly slot) while they do their photo-shoot. A little birdie (cough) tells me there’s some kind of nakedness going on for this shoot today; but one must remain professional when faced with this kind of thing. That, after all, is something else I learned from my mother. And she’s never wrong.