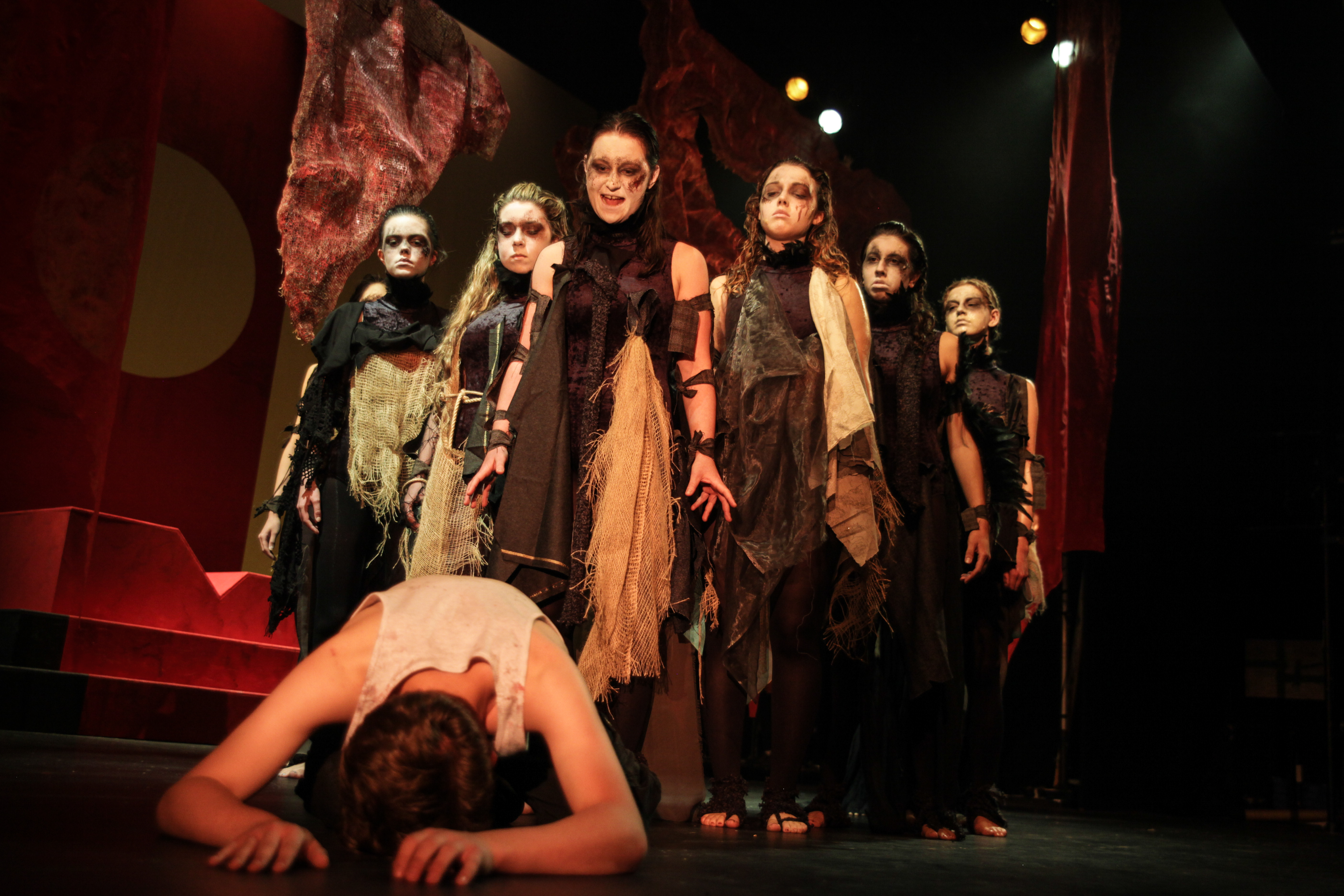 As light coaxes the scene into visibility, a man drags himself across the front of the stage. Behind him is an enormous extension of plastic, part-dangling placenta, part-distorted womb, part-shackling net. One is reminded of Atlas and the earth that it is his destiny to shoulder. Inside the plastic is a body. Soon we will realise that it is the man’s dead mother, and that it is he who has killed her.

So opens the triennial Oxford Greek Play, which brings the final part of Aeschylus’ Oresteia trilogy, The Eumenides (otherwise known as The Furies) to the Oxford Playhouse. Entirely in ancient Greek, with English subtitles, the Oxford Greek Play has a well-deserved reputation for extreme difficulty in conception and for excellence in realisation. The Furies, directed by Arabella Currie, does not disappoint.

The play is a masterful rendering of Aeschylus, with an innovative artistic interpretation that enables the language—the evocative revival of which is the whole point of the Oxford Greek Play—to kindle forcefully a sense of the power and range of its meaning.

Orestes has killed his mother, Clytemnestra, to avenge the death of his father, Agamemnon, murdered by Clytemnestra and her lover upon his glorious victory return from Troy. The Furies want vengeance and have sworn to plague Orestes beyond the grave for having murdered his kin. While The Oresteia is famous for its exploration of justice, what this production brings out is its artistry.

Currie’s play makes manifest the horror of Orestes’ experience, showcasing the sheer range of the resources of drama with obvious commitment, passion and talent. The hideousness of the Furies, for instance, is evident in every aspect: their shrieks, their movement, their number, their pleas and accusations and curses, even their song.

And that omits the most important of all: their words. For it is the achievement in language in this production that especially compels attention. In one of the earlier scenes, Clytemnestra exhorts the sleeping Furies to avenge her death. Frightfully she urges them to curse and quell her son. Her emphatic insistence on the way that Orestes is ‘laughing at you’ awakens the Eumenides, forcing them into a response that is already for them a kind of torture, recalling them to their fate as ‘daughters of the night’, foul and frenzied beings that are neither human nor god, and fit only for the most inhuman and ungodly vengeance.

Quite how consummate has been Currie’s direction and how complete her attention to the production is indicated by the link between Clytemnestra’s reference to the ‘tightest net’ of guilt, from which she claims Orestes has escaped, and the image with which the play begins. The mention of ‘net’ recalls the visual imprint marked in the opening scene, that of Orestes dragging his mother’s corpse in plastic behind him. It is clear that the net is something he has not escaped, whether or not the Furies continue to follow him. This makes the mother’s relishing of the prospect of her son’s punishment all the more awful: ‘I am Clytemnestra, calling to you’, she shrieks at the Furies. And, worse: ‘What are you for, except to do evil?’

The torturous imagery of the language is told in good characters as well as bad. Apollo, wonderfully played by Jack Taylor, wreaks cursing words on the Furies that are almost as devastating as those they hail on Orestes. He is merciless, objurgating them even for their presence amidst ‘prophetic walls’, which ‘it is wrong for you to touch’, as they belong only in the hell-place where ‘murder is justice’. He tells them to ‘vomit those clots you slurp from slaughter’. Let no one accuse Aeschylus of writing only didactically.

Instructive though the interrogation of justice certainly is, above all it is language that holds the key to those who adhere to or deviate from it. Hearing the Greek and seeing the English, words from two and a half millennia ago, only makes this clearer. While the Furies chant a death-song over their victim, revelling in its ‘frenzying, maddening, mind-sickening’ qualities, Apollo advocates the ‘ice cold thrust of the public whip’.

It is Athena who is able to conciliate Apollo and clear Orestes; most importantly, though, it is she who can bring a justice to the Furies that is also merciful. The building of music at the end and a slow shifting of the set from red to white present strikingly the creation of a new order of justice. The reign of the Furies, whose ‘hymn [is] to bind the soul lyreless, man-withering’, is at an end, along with the horrors of their language. Currie makes this point even more forcefully by having the voices of the Furies change along with their demeanour at the play’s close.

The Furies runs at The Oxford Playhouse until 18th October